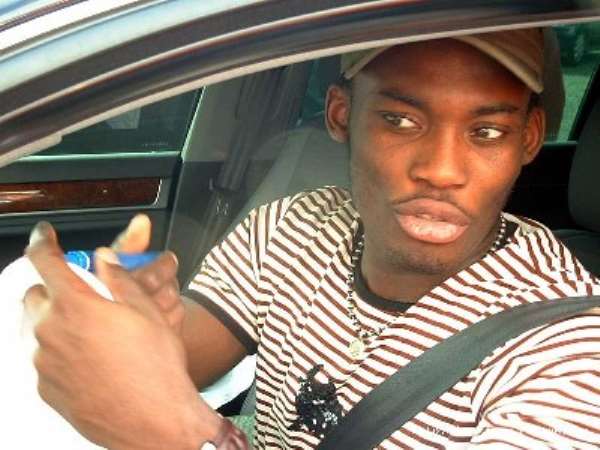 ESSIEN TO BEG LYON: LET ME JOIN THE BLUES Chelsea are willing to pay MICHAEL ESSIEN around £75,000-a-week, terms that he is aware of as he prepares to ask Lyon to let him go. The Ghanaian inernational is desperate to become Chelsea's first big-money buy for next season - and will plead with Lyon to let him go. He knows that Jose Mourinho wants him to add goals and flair to his midfield. The deal - first revealed by The SP four months ago - is on after Chelsea made an opening £15million offer for the powerful star of the two-times French champions.
And Essien has told friends that he wants to go now rather than wait for a year when Lyon have agreed to sell him in the summer of 2006. Essien, who speaks perfect English, has really taken a shine to the Chelsea move despite saying he would like to join Manchester United in the past. The brilliant young African will wait to see if Chelsea can agree a fee. His advisers fear Lyon will say 'no' even to £18m. If Lyon reject the approach then Essien is likely to ask for a transfer and head for Chelsea, although, according to rumours in Spain, Madrid could make a late move.
Meanwhile, Lyon could turn to ex-Liverpool boss Gerard Houllier to take over from coach Paul Le Guen, who quit last week.
Houllier is "flattered'' to be linked with a return to his homeland after a year out of work since he was axed at Anfield.
JOSE MOURINHO will offer Carlo Cudicini a new contract this week in a bid to keep him from the clutches of Manchester United.
The Blues boss said: "He knows we love him.''

Latest Photo Reports
Catch up with all the political quotes from our politicians.
Advertise here
More Football News
ModernGhana Links
Mohammed Polo speaks on how Milovan Rajevac can qualify Black Stars for 2022 WC
Callum Hudson Odoi aiming to keep his place in Chelsea XI after impressing against Norwich
Ronaldo reacts after Manchester United mauling against Liverpool
I do believe in myself, Solskjaer says after Liverpool humiliation
Growing influence of Ghana’s ‘diasporan’ stars
Caf Confederations Cup: Hearts of Oak to know opponent on Tuesday
'Samuel Boadu will answer some questions' - Hearts of Oak board member speaks after 6-1 demolishing against WAC
CAF CL: 'We are sorry' - Hearts of Oak apologize to fans after 6-1 humiliation defeat to Wydad AC
Checkout matchday 1 fixture of 2021/22 Ghana Premier League
TOP STORIES