Hearts and Kotoko in a "battle of equals" ? 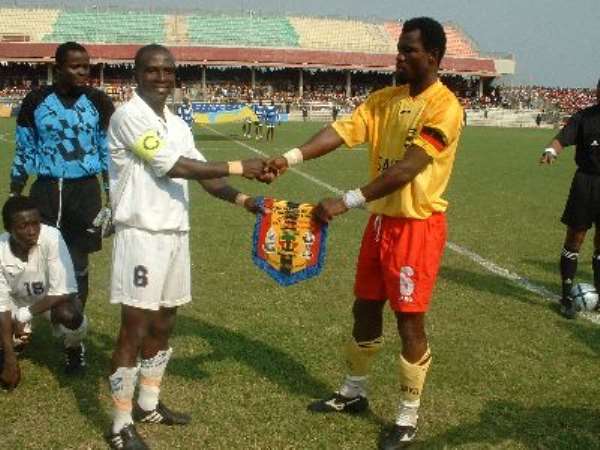 Pundits has dubbed it "a battle of equals" based on their respective run in the five-week old premiership, but the Baba Yara Sports Stadium would become the final arbitrator when the country's two most glamorous clubs, Accra Hearts of Oak and Kumasi Asante Kotoko clash on Sunday. With so much at stake for not only the clubs, but with the two coaches, Malik Jabir and Ofei Ansah desperate for trust and recognition, Sunday's clash would produce the ever-present excitement and intrigues that come with such meetings. Never mind that the usual tensed build-up, the jaw-jaw, mind games and euphoria that greets such pairings has gone missing presently - it still remains the duel that one has to look up to at the moment as the season's time table is drawn. Ironically the "Porcupine Warriors" have twice lived in the shadows of the "self-motivated" Phobians at the time the bookmakers favoured them this year, but with both at par this time around, it remains yet to be discovered who would topple the other. Like the "Reds" coach, Jabir desperate for recognition from the expectant followers of the club, Hearts' Ansah who works as a stand-in coach must obviously yearn to prove a point to keep their respective jobs. Both teams have fared below expectation since the season begun, but undoubtedly would characteristically give up anything to ditch each other in their quest to confirm their superiority or otherwise on the day.
Not even the victory of the Phobians in the Confederation Cup at the same venue makes them the hot favourites, but Kotoko who have laboured to record slim wins so far are yet to prove why they must be tipped as such.
It took the bravery of defender Dan Acquah to thrice rescue the team with timely goals thus giving their pre-season "hero" Nasiru Ghani and compatriots in attack enough work to prove themselves as worthy finishers when it matters most.
But as to whether the defending champions who until their 1-0 victory over Heart of Lions were win-less at home but grabbed all six points away would allow Arhin Duah and colleagues the luxury of using them as launch pad remains your guess as mine.
Hearts themselves haven't fared any better as with a porous defence they have so far conceded as many as six goals by the third week - a situation that becomes an apparent headache for coach Ansah. But the battle line is already drawn and superior tactics cannot be ruled out of the magic that can unlock each other. That mistakes are costly in such duels is a truism, but the difference will be which of the tactically rich coaches can make in such battles remains the key to victory on Sunday.
Elsewhere, Liberty Professionals would play host to "Giants of the West" Sekondi Hasaacas in a game, which can go either way if their respective last performances are anything to go by.
The Obuasi Len Clay clash involving AshantiGold and rampaging King Faisal must be one to attract lots of patronage from lovers of good football.
The clash of the "Real's" - Real Sportive and Real Tamale United (RTU) would be at the Tema Park. The Sunyani Coronation Park would see Tano Bofoakwa hosting Power
FC with Kade Hotspurs playing as guest of winless Kpando Heart of Lions at Kpando.
League leaders Gomoa Fetteh Feyenoord would aim at protecting their lead as they trek to the mountains to face unimpressive Okwawu United whilst Dwarfs welcome highflying Berekum Arsenals at the Robert Mensah stadium at Cape Coast.