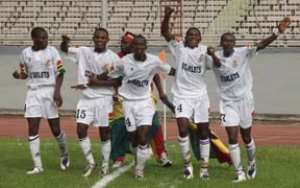 Banjul, Gambia, May 11, Ghana's under-17 soccer team, the Black Starlets on Tuesday, experienced a major slip in the on going Sixth Africa Under-17 Tournament in Gambia when they lost 2-1 to their Burkinabe counterparts at the Independence Stadium.

The Starlets were simply uninspiring in the greater parts of the game as they struggled to put their acts together and paid dearly for it by losing at the end of the day thus failing to secure an advance semi final ticket.

Perhaps this might be the result of a reshuffle in the team for the Burkina game, but coach David Duncan thinks otherwise. Coach Duncan, who missed the services of Solomon Addy in defence as a result of injury and was compelled to start with Jerry Akaminko, whilst Charles Boateng was also put in the starting line-up, with Mubarak Wakasso shifting to the left side of defence, believed Addy's absence caused them the game.

He said, both goals came from that position and believed Addy's presence in the match would have made the difference. The Ghanaian coach lamented over the absence of the player in defence though he described the results as one of the things to expect in football.

Having conceded two goals within 15 minutes of the game, he applied his first substitution by taking off Wakaso for Kennedy Korley as early as the 12th minute, while bringing on David Telfer for George Appiah in the 32nd minute.

None of these options proved effective for the Ghanaians as they were unable to find their rhythm and they struggled unsuccessfully to put their acts together.

The Starlets remained under constant pressure in most parts of the game and it was therefore not surprising when they conceded an own goal. For the second time in the tournament, the Starlets suffered an own and this time, Akaminko was the culprit.

Akaminko, in an attempt to make a clearance misdirected Francis d' Assisi Yameogo's cross into his own net in the 9th minute. Their attempt to provide an instant equaliser failed as the Starlets failed to glitter, conceding the second goal three minutes latter.

The Heart of Lions central defensive pair of Akaminko and Jonathan Quartey were unable to check an aerial float for Marius Sibdou Kiema to head home a perfect cross from Ouebalena Ousale.

The Burkina Faso boys kept their lead over the Starlets for the rest of the half and could have increased the tally but their front men seemed satisfied with the score-line, while Ghana's closest chance, which came in the 28th minute was fired wide by James Tagoe after he was put through by Opoku Agyeman.

It was a tough half for the Starlets as they were unable to find their feet but the second half was more terrible and the vociferous Gambians who were solidly behind them looked disappointed.

The only compensation they had for their Gambian fans were occasional signs of brilliance, which never provided goals.

Not even the substitution of Sadat Bukari for Emmanuel Banahene 30 minutes before the close of the game could change their pattern of play as his presence in attack did little to support the goal search for the Ghanaians.

In spite of this, the Starlets continued with their struggle and came very close to scoring in the 78th minute when Quartey's delivery hit the cross bar to deny them a consolation in the half.

The consolation, however, materialised in the 81st minute through a penalty after referee Paul Phomane of Lesotho spotted a handball in the vital area of the Burkinabe. Agyeman converted it for Ghana in the 82nd minute.