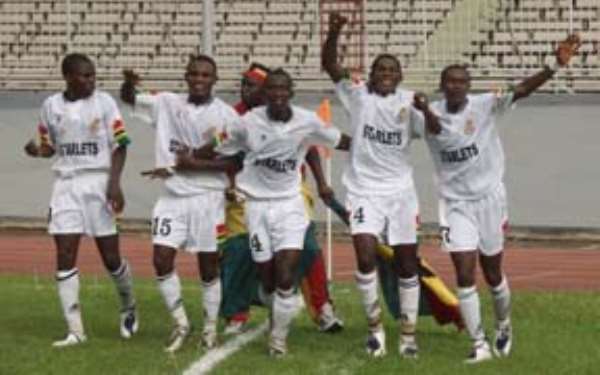 Banjul Gambia Banjul, May 8, GNA - The National Under 17 team, the Black Starlets survived a major scare at the hands of their Malian opponent in their opening match of the Sixth Africa Under-17 Tournament, in the Gambia. The Starlets, one of the highly favoured side in the competition, have to come from behind on two occasions to win the game 3-2 at the Independence Stadium in Bacao, Gambia.

Playing in an all white lotto designed jersey, the Starlets were stunned in the 8th minute of the game when Diabate Cheick Tidiane capitalised on the inability of the Ghanaian defence to take control of an aerial ball and fired into the roof of the net for the opener. The Ghanaians gave swift response to the situation and cancelled the lead minute later through Emmanuel Banahene, who wasted no time in connecting Wakasso Mubarak's cross.

After the early display of brilliance and strict tactical play from the two sides, the strong and athletic Malians took control over the game in all departments.

They neutralised the Ghanaian midfield and rendered the attack ineffective, whilst the defence went through hell in checking Diabate Cheick who was a constant threat to the Ghanaian defence. Though under pressure the Ghanaians displayed sheer character and bravery in battling their opponents who also could not capitalised on the series of chances they created, as Diabete and Troare Mohamed became the worse culprits.

The trend continued till the close of the first half, but the Malians never relented in their effort to take the lead again and had this materialised five minutes into the second half when a misunderstanding between Skipper Emmanuel Ansong and keeper Nana Bonsu resulted in the former scoring an own goal.

Coach David Duncan, who conceded in a post match interview that, his boys were stretched to maximum limit due to the strong and athletic nature of his opponents introduced David Telfer for Wakaso who brought some stability into the midfield but this was not enough to stop the rampaging Malians. The Malians again came close to scoring when Traore Abdou came up against Keeper Bonsu but the latter ensured the team did not concede another goal.

The technical team of Ghana was compelled to make another change as a result of an injury sustained by defender Solomon Addy and this turned out to be a blessing for them as substitute Jerry Akaminko relied on his strength and height to put the breaks on the Malian attack and this changed the fortunes of the team. The Starlets started to discover their rhythm on a gradual note, but it was George Appiah whose combination in attack with Opoku Agyemang made the difference at this stage.

Agyemang, obviously the brightest spot in the Ghanaian team and headache for the Malians, with his pace, strength and skills made an incursion into the vital area of his opponents and was brought down in the 71st minute, when he was on the verge of scoring. Referee Omgba Zing Martin of Cameroon, though hesitant, whistle for a penalty and this was converted by Appiah a minute later.

The equaliser unsettled the Malians as they lost their bite upfront. Agyeman's combination with Appiah resulted in the match winner when the latter set Agyeman former up, who wasted no time in converting it in the 78th minute.

The Ghanaians managed the sustained pressure of the Malians in the last ten minutes of the game to keep their lead. Coach Duncan, described the Malians as better side with strong and athletic players.

He said this gave his boys a lot of trouble but the level pre tournament preparations the team went through saw them triumphant.