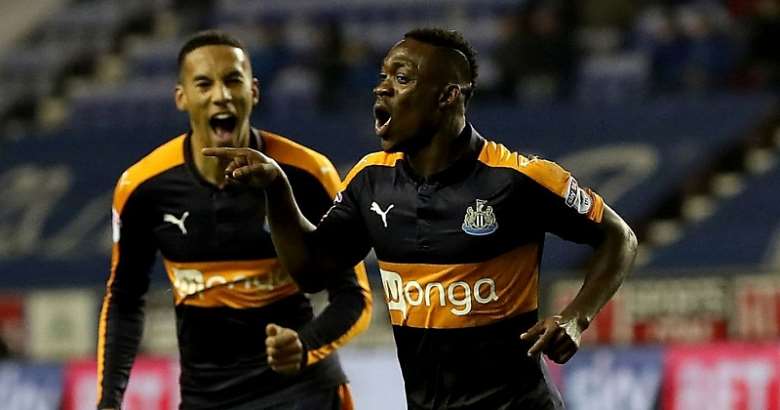 In-form Newcastlke United winger Christian Atsu has hailed his team mates Dwight Gyale and Ritchie for their performance in their hard fought win over Burton Albion in the English Championship League.

Ritchie netted his 15th goal of the campaign in Wednesday night's 1-0 win over Burton to return Newcastle to the top of the table.

The Black Stars winger, often found on the opposite side to Ritchie, echoed the contribution of his playmates after the game.

The Chelsea loanee thinks having the likes of Gayle and Ritchie in the United XI is invaluable, as both can win a match single-handedly, and have done so on numerous occasions this campaign so far.

'He is a great player,' Atsu said.
'He has good finishing - he can finish with the right or the left. 'I am also happy to play in the same team as him.

'It makes life much easier for the other players - he can win games on his own for us. 'Having players like Matt and Dwight in our team, we are very happy.'

The swift winger however warned his colleagues against complacency and called for focus ahead of their next game.

'It will be a very tough game,' he said of the visit to Sheffield Wednesday. 'We have a very good away record but that does not count for anything. 'We have to just keep working hard.'

Use dialogue, not brute force, childish behavior and 'takaas...
29 minutes ago

NDC to hold town-hall meeting in Kumasi to dissect Ghana’s a...
2 hours ago