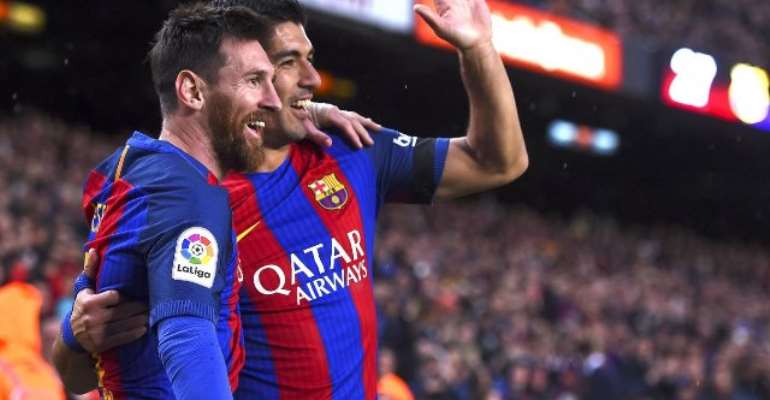 Lionel Messi marked his return to the Barcelona side with a glorious double in a 3-0 gutting of a struggling Sevilla at the Camp Nou.

The little Argentina forward missed Sunday's 4-1 win at Granada due to suspension, but wasted little time in returning to the firing line, helping Luis Enrique's side move one point clear of Real Madrid at the top of Liga before their fierce rivals visited Leganes later on Wednesday evening.

Barca never looked back after Luis Suarez scored with a classic overhead kick on 24 minutes from Messi's cross before Suarez returned the favour to supply Messi for the second goal four minutes later after a blistering run by Neymar.

As the rain tumbled down on the Camp Nou, fourth-placed Sevilla - now on a six-game winless run - were in danger of capsizing as Messi picked a loose ball out of the air before thumping a volley low and hard into the visiting net on 32 minutes.

It was vintage Barcelona after the eight-minute goal burst with Andres Iniesta's touch and vision causing all sorts of problems as Barca somehow only declared on a 3-0 lead at half-time.

The second half was a case of the home side playing out time much to the relief of the visitors, who lost Vitolo in added time for a second booking. Sevilla remain fourth on 58 points, 11 points behind Barca.

Depending on Madrid's result at Leganes, Barca will at least hope they can go top on Sunday night when they visit Malaga only hours after Real Madrid host city rivals Atletico Madrid at the Bernabeu.