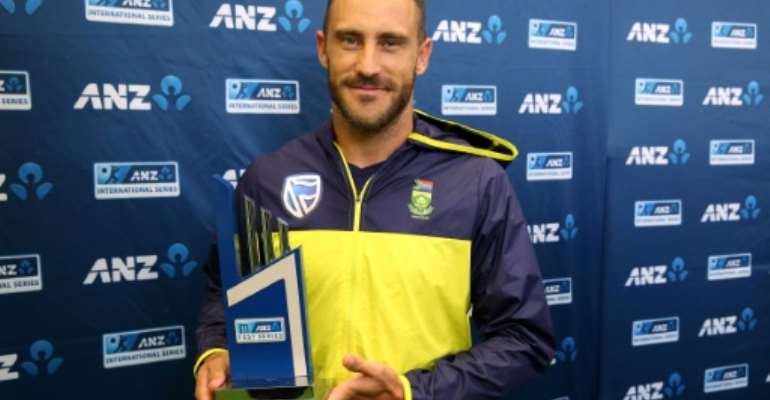 South Africa's captain Faf du Plessis holds the trophy on the day five of their third Test match against New Zealand, after the last day's play was called off due to rain, at Seddon Park in Hamilton, on March 29, 2017. By Michael Bradley (AFP)

Hamilton (New Zealand) (AFP) - New Zealand were left frustrated on Wednesday after rain washed out the last day's play of the final Test against South Africa, denying them a series-levelling win.

At the start of the day, South Africa were on the ropes at 80 for five in their second innings, still 95 runs short of making New Zealand bat again.

But the rain which had disrupted part of each of the first four days fell persistently on Wednesday, forcing the umpires to abandon play without a ball being bowled.

"Obviously very frustrating, coming into the last day with a lot to play for," said New Zealand captain Kane Williamson.

"Saying that, we were probably quite fortunate to play as much cricket as we did in this Test.

"Overall, we have to look at this game as a really positive game and one that was potentially one of our best Test performances of the home summer." 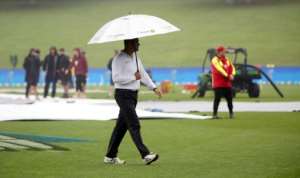 Rain washed out the last day's play of New Zealand's final Test against South Africa, denying them a series-levelling win, in Hamilton, on March 29, 2017

South Africa captain Faf du Plessis, who was unbeaten on 15, said their plan was for him to block all day while Quinton de Kock, also not out 15, chased the runs.

"It's a real fair assessment to say we got saved by the rain," said du Plessis.

"We were still very driven in making sure we do whatever it takes to get through but if you look realistically at the odds, New Zealand can count themselves very unlucky."

The drawn outcome ensured South Africa took the series 1-0 after winning the second Test in Wellington by eight wickets in three days.

Backs to the wall

The first Test was also rained out on day five when evenly poised with South Africa 224 for six in their second innings, a lead of 191. 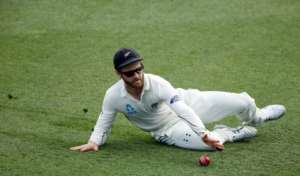 Kane Williamson of New Zealand fields on day four of their third Test match against South Africa, at Seddon Park in Hamilton, on March 28, 2017

Du Plessis said that apart from one day in Wellington, when New Zealand collapsed spectacularly, the two sides were evenly matched.

"This series has been one of what-ifs," he said.

"It all basically came down to a Test match in Wellington where New Zealand had one bad session, similar to what we had yesterday and that determines the outcome of the Test series."

But ahead of their Tests against England, following the Champions Trophy in June, du Plessis said the New Zealand series highlighted how South Africa needed to work on their top-order batting.

"I'm very disappointed. As a whole series we can look at the top six, the lack of hundreds, the lack of good starts we had, we were playing with our backs to the wall most of the time as a batting unit. That's a real concern," he said.

South Africa's best opening partnership was 18 in Wellington, and Dean Elgar's 140 in Dunedin was their only century.

New Zealand's best opening partnership was an 83 in Hamilton and they scored a century in every Test.

Williamson scored 130 in Dunedin and 176 in Hamilton, with Henry Nicholls scoring 118 in Wellington.