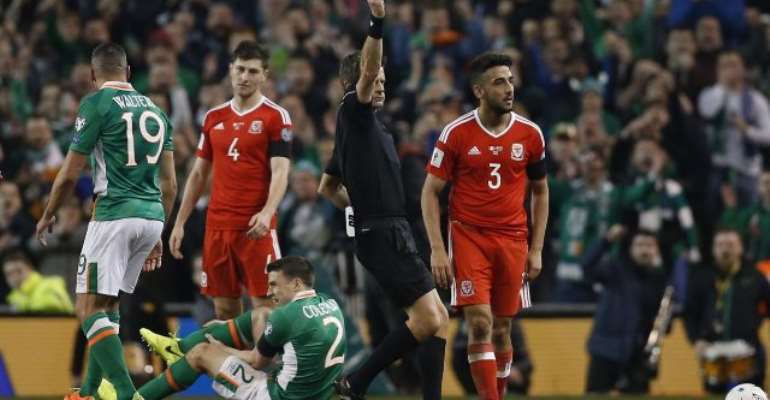 Seamus Coleman suffered a nasty injury and Wales’ Neil Taylor was shown a straight red card as the Republic of Ireland and Wales played out a goalless draw in Dublin.

The injury, which came midway through the second half, drew immediate concern from both sets of players, with Shane Long immediately going to console his team-mate as Coleman received treatment from the Irish medical staff.

The challenge came minutes after Gareth Bale had been shown a yellow card for a late challenge of his own and that booking will rule him out of the game against Serbia, a match that is crucial for the Welsh now.

For most of the game it was Bale who looked as if he would break the deadlock. The Real Madrid man was everywhere and kept trying clever passes or ambitious shots. However it didn't quite come off for him, perhaps suggesting that he isn't still fully match fit following a long lay-off.

After Coleman's injury and Taylor's red cardIreland took control and they started to pepper the Wales penalty area with as much pressure as they could muster.

Ultimately though Wayne Hennessey wasn't forced to make a big save, indeed the Welsh keeper caused the biggest moment of panic when he dropped the ball under no pressure, fortunately for him Ashley Williams was on hand to clear.