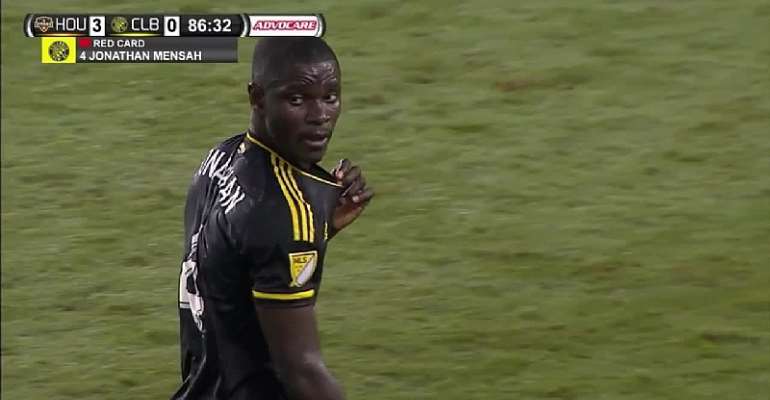 Columbus Crew have decided against appealing Jonathan Mensah's red card, ruling him out of the clash against D.C United in the Major Soccer League on Saturday.

Mensah was shown the marching off orders in the side's 3-1 defeat at Houston Dynamo in the MLS over the weekend.

Crew coach Berhalter cited the "process about how it gets overturned" as reason to avoid appealing the red card. Teams have the right to two unsuccessful red card appeals per season.

"Having reviewed the play over 25 times, it was 100 percent not a red card," Berhalter said. "Having watched it, what actually happened was as he's going to play the ball he slips and he passes the ball, slips, his leg follows through, makes no contact with the guy (and)) actually the guy contacts him with the bottom of his shoe and then he rolls on the ground and holds his leg. It didn't look great, but when you slow it down there was nothing to it."

Teams must provide the league with written notice of an appeal within 24 hours of a match's conclusion. That gave Berhalter around a 10:30 p.m. Sunday deadline.

"Well, I mean, we're pretty successful, right, in what we've been doing," Berhalter said. "We're not necessarily proud of that, but I think we're able to understand when it's a severe error and get it corrected."