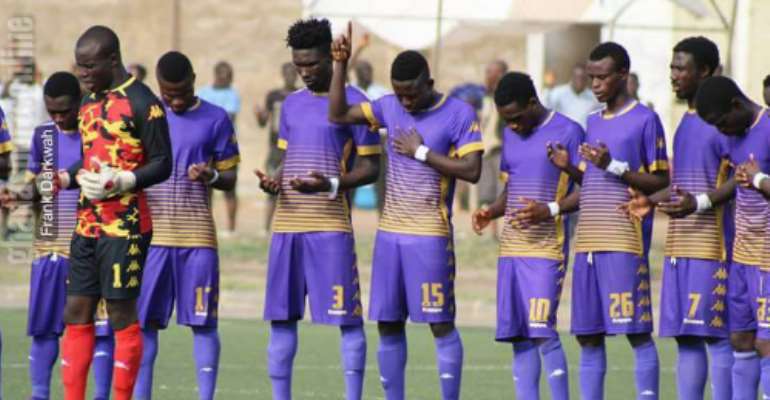 After back-to-back defeats, Tema Youth Football Club will be seeking to redeem their winning fortunes on Wednesday, March 15 as they face Accra Hearts of Oak on matchday 7 of the 2016/2017 Ghana Premier League at the Community 3 Park.

Things were really looking gloomy for the Harbour City Boys [Tema Youth FC] until they suffered two straight defeats on the road to Bechem United [0-1], and the West African Football Academy [1-2] within four days.

Glorious Hearts of Oak on the other hand go into this fixture with millions of smiles on their face having recorded a sweet home victory [2-1] over their greatest regional rivals - Great Olympics last Sunday at the Accra Sports Stadium.

Tema Youth have not lost any match at home this season and would not love to trade points for any amount in whatever currency with the Phobians [Hearts of Oak] come this Wednesday, but the visitors look poised for action and would also like to use this particular match to issue a strong statement ahead of their titanic clash against Asante Kotoko on Sunday.

The match is going to be an interesting one to watch, but at the end of the day I for see Tema Youth winning by a slim margin or at worst, sharing points with Hearts of Oak.

At the Baba Yara Sports Stadium in Kumasi, Asante Kotoko will welcome the West African Football Academy [WAFA] to the Garden City.

The Porcupine Warriors [Asante Kotoko] following their 1-1drawn game with Bolga All Stars last Sunday got exceedingly miffed at the Club Licensing Board for accrediting the tattered Tamale Utrecht Park as a venue fit to host Premier League matches.

Kotoko lost two valuable points in that particular match thus giving leaders, Aduana Stars the opportunity to stretch the gap between them to 2 points. But luckily for the Porcupine Warriors, they’ll be playing in front of their ever chanting supporters this time around.

The soccer physicians [WAFA] are not comparable when it comes to stroking the ball on the turf, but they look quite soft underbelly [in the middle] and for them to pull a surprise at the Baba Yara Stadium on Wednesday, they need to screw things very tight in the midfield.

In fact, the West African Football Academy can be described as son-in-laws. This is because the entire team plays with an aesthetic identity worth watching on any day.

Again, playing entertaining football really is a noble pursuit, but WAFA also needs to learn how to turn the screws on in attack in other to achieve the desired results.

The way Asante Kotoko is winning their home matches this season is gradually becoming like a copybook and I expect them to knick a shot over WAFA through the same fashion.

The soccer miners [AshantiGold SC] have conceded an unprecedented 9 goals in their last two matches and a split of points on Wednesday will certainly cause a serious unrest within the club.

Liberty Professionals are fifth [5th] on the league log with 9 points and would love to travel back to the Capital, Accra [Dansoman] with at least a point, but I think AshantiGold is going to pick all three points at stake to ease the pressure on the team.

Aduana Stars returns to their favourite Nana Agyemang Badu Park in Dormaa to host Medeama Sporting Club. Aduana Stars are still unbeaten after 6 matches [winning 5 and drawing 1] and would like to maintain their enviable record.

Mysterious Ebusua Dwarfs will also travel up north to play as guest to defending league champions, All Stars at the Wa Park.

The Wa Park is not a fertile ground for most visiting teams not excluding Ebusua Dwarfs.