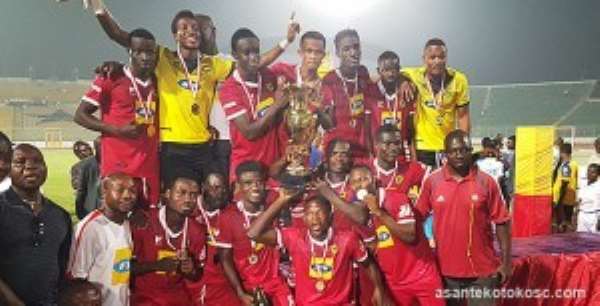 Players of Ghana's most decorated premier league club, Kumasi Asante Kotoko S/C, are in high spirits as they readied for the start of 2016/2017 league, this coming weekend.

There has been massive changes in the team, which should leave nobody in doubt about its intentions - the desire to win the title.

Skipper Amos Frimpong told the GNA Sports, that they were determined to get back to the winning ways - their previous all-conquering and fearsome form, to make their teeming supporters happy.

He applauded the fans, who had been loyal and stood solidly behind them even when the going had been tough.

Kotoko will play Liberty Professionals in their opening fixture at the Baba Yara Stadium, a match that promises to be thrilling.

Skipper Frimpong said they would be going into the game with one driving purpose - to collect the three points.

'We have had a good pre-season ahead of this year's league, and the morale in camp is high', he added.

The Kwame Kyei-led administration, since taking over the affairs of the club, has overhauled the technical department and playing body.

Croatian Coach, Zdravko Logarusic and his players appear eager to make a strong showing in the premier league considering the intense preparations.

With the inclusion of former Medeama striker, Kwame Boahen, Ollenu Ashietey, Baba Mahama and Emmanuel Gyamfi, fans could only expect sublime performance by their darling club.

Skipper Frimpong said Kotoko fortunes would not be affected by the departure of striker Dauda Mohammed and midfielder, Stephen Nyarko.

He rallied the fans to throng the stadium to cheer the team to victory.

Give EC Benefit Of Doubt On 24-hour Results Promise – CDD-Gh...
3 minutes ago