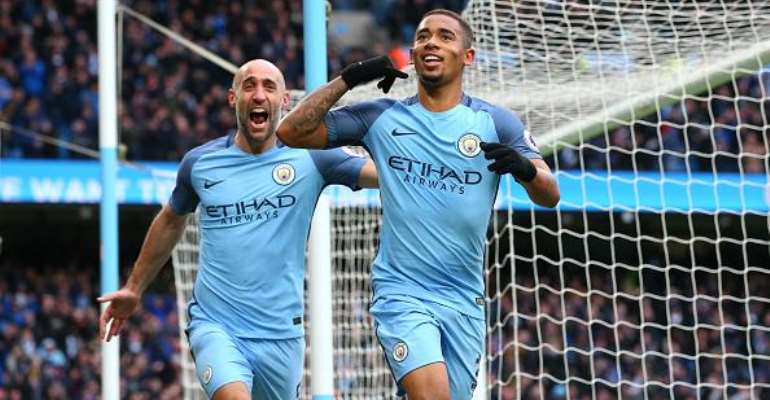 They signed a striker who has all the makings of a superstar, and dropped their error-prone goalkeeper for a more reliable option.

They created chance after chance in what was one of the most one-sided 45 minute displays of Premier League football this season.

Yet Pep Guardiola must still be wondering what needs to be done to make Manchester City more ruthless following a 2-1 win over Swansea.

Gabriel Jesus made his mark on the game twice, opening the scoring inside 11 minutes and adding the winner in second half injury time after Gylfi Sigurdsson had appeared to have rescued a point for Paul Clement's men.

But it was a game which characterised all City's struggles, as despite the three points moving them into third place, they made it much harder for themselves than it should have been.

City started on the front foot, with teen superstar Jesus firing over from close range just a few minutes in, before being denied what appeared a penalty after an apparent foul from Mawson.

But the Brazilian could not be shackled for too long, and he fired past Fabianski inside 11 minutes after some great work from Silva on the left side of the area.

The Swans did find themselves in City's half after a quarter of an hour, and a poor back pass from Clichy almost put Sigurdsson through on goal; but it was a rare momentary threat posed by the visitors.

Jesus twice went close to doubling the lead – his movement continually confounding the Swansea defence – and Toure somehow dragged a shot wide after a corner fell to him on the penalty spot.

De Bruyne mustered three chances in quick succession – all of which were blocked – and for all City's dominance, praise had to be given to the impressive Swansea resistance.

Despite taking 10 shots, only three were on target, and the visitors seemed to gain character from their opponent's profligacy as the half wore on.

A bright spell from Clement's side signalled the end of the opening 45 minutes, as although the half-time whistle went without an attempt from the Swans, they were starting to make progress in the final third.

They continued this progression in the early stages of the second half.

Olsson drew a foul from Fernandinho with a direct run into the area in the opening stages, and Sigurdsson crashed the resultant free-kick against the post, although Sane's own shot which hit the post was a clear sign of City's threat.

Scrappiness was the defining word of the following 15 minutes, with the visitors pressing high up the pitch and preventing Guardiola's side building any momentum.

And it was the Swans who were having the only chances on goal, with a number of counter attacks threatening Caballero and Mawson flicking a header just wide of the far post from a corner.

Two positive substitutions saw Clement bring on Narsingh and Dyer as his team pushed for an equaliser in the final 15 minutes.

And the equalising goal, which was coming, finally came in the last 10 minutes, Sigurdsson firing low past Caballero from outside the area.

City pushed to reclaim their lead, but the profligacy which has characterised their season continued in the dying stages.

Sane wasted one chance, Aguero was denied by a block, but there was time enough for Jesus to tap home the rebound after Fabianski had saved his header to claim all three points and make up for a wasteful City showing.