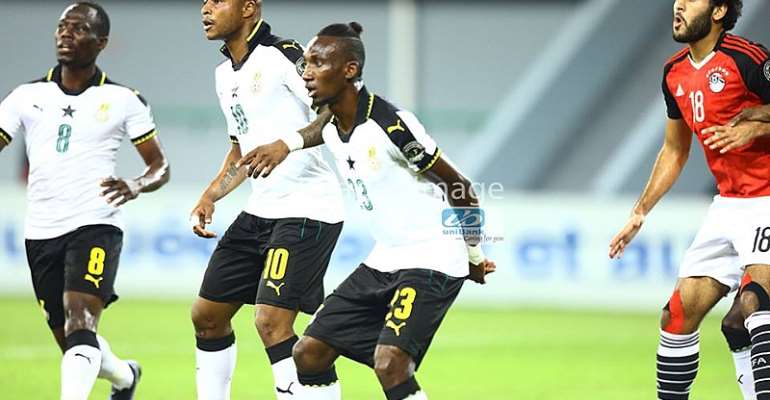 Mohammed Salah's ferocious free-kick on ten minutes condemned Ghana to a 1-0 defeat in Port Gentil on Wednesday in their final Group D match.

The loss cost the Black Stars top spot and a long journey to Oyem to face DR Congo in Sunday's quarter-final.

Both Egypt and Ghana played out an entertaining match with superior technical quality on display but the Pharoahs nicked it early on with a spectacular set-piece.

The Black Stars made an early incursion and fired the warning shot when Emmanuel Agyemang Badu rocketed his volley after being set up by Samuel Tetteh, who was making his tournament debut.

It did not take long for Egypt to reply and midfielder Abdallah El Said won a free-kick after being tripped by John Boye close to the penalty arc.

The Pharaohs big man Mohammed Salah scored with a cracking kick penetrated the disintegrated wall where Andre Ayew was standing and goalkeeper Razak Brimah was left with very little to do.

Afterwards it was Ghana who showed the initiative and began to push further. A promsing move came when Asamoah Gyan released Andre on the left but the West Ham United star first touch was poor.

His second control was okay and he managed to burrow into the box and then chip one inside but Essam El Hadary, the Egypt goalkeeper, picked it up.

Egypt could have doubled the lead on 38 minutes when Brimah's clearance on an Afful back pass went straight to Salah who lifted it over the frame.

Five minutes to end the first half, Ghana suffered a massive injury blow when Gyan was replaced for picking up what looked like a hamstring injury.

Amartey came close with a diving header on a free-kick glided in from the right by Atsu. The Leicester City man at the far post.

Egypt responded with a nice break from Fathy who found Salah and the Roma star released El Said who did not shoot but set up El Neny but the Arsenal man's low shot was blocked inside the box.

After the break, possession was fairly balancedAtsu made a surging run and survived tackles but his attempt to shoot from inside the box was miscued and it came off his shin.

Just after the hour, Jordan was denied by Ali Gaber with a sliding tackle inside the box after the Ghana substitute was put through by Atsu.

Badu delivered a trademark long range shot which was parried but into play by the colosus El Hadary.

The ball dropped to Tetteh who decided to fly one into the box but his effort eluded the men in white and ball allowed to roll over for a goal kick.

Atsu turned on his style against drew some free-kick with his runs and skills but Ghana could still not find the equalizer.

Tekpetey's first touch on the ball earned him a yellow card after a silly challenge on Mahmoud Trazeguet.

Jordan Ayew tried to pull a rabbit from his hat when he shrugged off his marker but his powerful shot from inside the box was palmed away by the dependable 44-year-old goalkeeper Essam El Hadary.