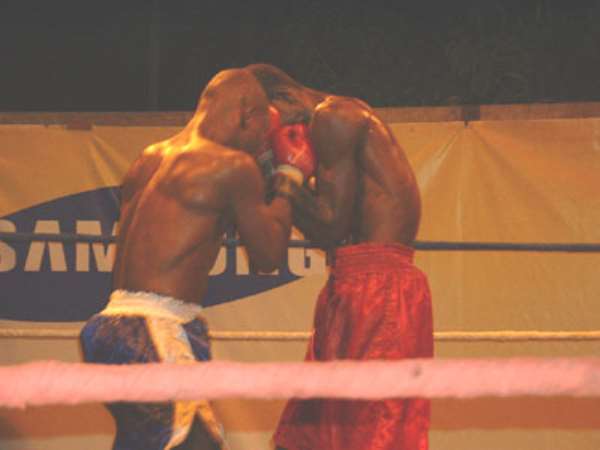 Accra, April 3, GNA - Braimah Kamoko, popularly known in boxing circles as "Bukom Banku" could not live up to his earlier prediction of stopping his Nigerian opponent, Michael Gbenga in the second round of their Africa Boxing Union (ABU) Light Heavyweight championship as the fight travelled the full distance.

Kamoko who is noted as an expertise with knock-outs, met an opponents who is also an expert in knock-outs with a record of all his 11 fights through the short route, hence a fierce fight was sold to boxing fans at the Azumah Nelson Sports Complex in Accra on Friday night.

The Nigerian provided fans with their money's worth as he came into the match with a well rehearsed strategy of folding his two arms to serve as a protective guard to his face in order to avoid the deadly punches of "Banku" and this strategy he was able to implement to perfection as all attempts by Kamoko to connect any of his deadly punches proved unsuccessful.

It was, however, Gbenga who instead did all the successful connections onto the face of Kamako anytime they opened fire to trade punches on each other.

In spite of this, the Ghanaian never relented in his efforts to end the fight through the short route and went attacking round after round. He succeeded in landing a powerful hook that sent Gbenga to the canvas in the fourth round, but the Nigerian managed to survive the counts of referee Godfred Cobblah.

From this stage, the remaining rounds resulted in fierce exchanges from both boxers as they both displayed much stamina and the fire-power to the delight of the fans.

Gbenga stunned the local fans with his accurate punches and managed to open cuts in the mouth of Kamoko. The Ghanaian bled from his mouth throughout the last four rounds, but this did not take anything away from his strength.

The Nigerian was however unable to protect and withstand another killer punch on his face from Kamoko and visited the canvas for the second time in round ten, but the durable boxer managed to survive the referee's counts again.

Bleeding Kamoko remained resolute in his bid to secure a knock-out as he continued to attack his opponent chasing him from corner to corner while Gbenga on the other hand resorted to clinching at the least opportunity, especially in the last two rounds to keep his chances of surviving the full distance. This he was able to execute perfectly till the fight came to an end.

The vociferous fans of "Bukom Banku" who sat on tenterhooks right from the onset of the bout, were not jubilant after the fight and had to wait anxiously for the referee's verdict.

The verdict was however received with some boos as a section of the Nigerian community as well as some Ghanaians felt Gbenga deserved a win or at least a drawn fight.

In another championship bout, Bilal Mohammed won the vacant National and West Africa Lightweight title when he defeated Alex Brew on points.

Bilal scored a unanimous decision of 119-111, 116-111 and 117-110 on the cards of the three judges to clinch the title. In the fight itself both boxers however failed to put an impressive performance despite the status of the bout and sent fans sleeping throughout the 12 boring and inaction rounds. In the other under-card bouts, debutant Emmanuel Lartei Lartey secured a fifth round technical knock out over Frank Dodze in a six round Super Lightweight contest.

Jospeh Kwadjo, "the Pride of Osu" also secured a round five technical knock- out over Gabriel Adoku in their eight round Welterweight contest.

Alfred Kotey's comeback was met with an unpleasant night as young Isaac Quartey defeated him on points in a ten round Super Lightweight contest.

Quartey who looked stronger and smarter than the former world champion, scored a split decision of 94-96, 95-96 and 97-95 to win the day.

If Ghanaians retained Akufo-Addo, we'll also endorse all his...
7 minutes ago