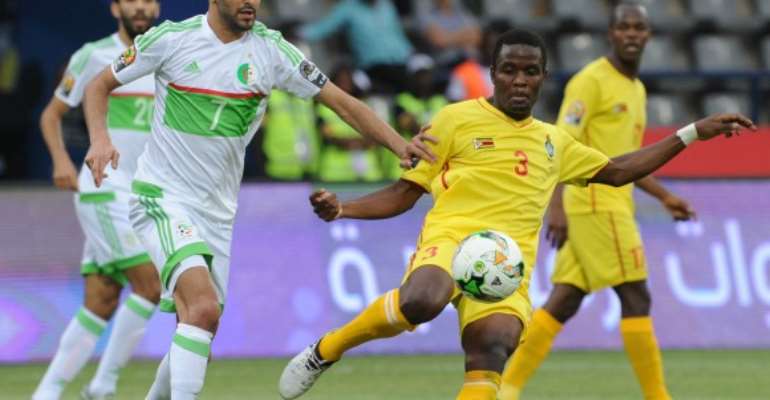 Algeria and Zimbabwe drew 2-2 in the 2017 Africa Cup of Nations (AFCON) game at the Stade de Franceville in the Gabonese city of Franceville on Sunday evening.

The Desert Foxes of Algeria went into the Group B encounter hoping to avoid an upset against the stubborn Warriors of Zimbabwe.

The deadlock was broken 12 minutes into the game by Riyad Mahrez, who curled his effort into the far corner to make it 1-0 to Algeria.

However, the lead only lasted for five minutes as Kudakwashe Mahachi levelled matters with a brilliant finish - making it 1-1 for Zimbabwe in the process.

Algeria, who were the favourites heading into the game, were stunned when Nyasha Mushekwi handed Zimbabwe a 2-1 lead from the spot-kick in the 28th minute.

The 2016 CAF Footballer of the Year Mahrez and his Algerian team-mates were contained by the Zimbabweans until the match referee blew the half-time whistle.

A second-half which was dominated by Algerians followed as Zimbabwe were happy to sit back and launch counter attacks.

However, their goalkeeper Tatenda Mukuruva was kept very busy by the Algerian attackers such as Yacine Brahimi, Islam Slimani and Mahrez.

With eight minutes left on the clock, Algeria deservedly levelled matters when Mahrez scored with a long range effort which beat Mukuruva and ultimately, the match ended in a 2-2 draw.