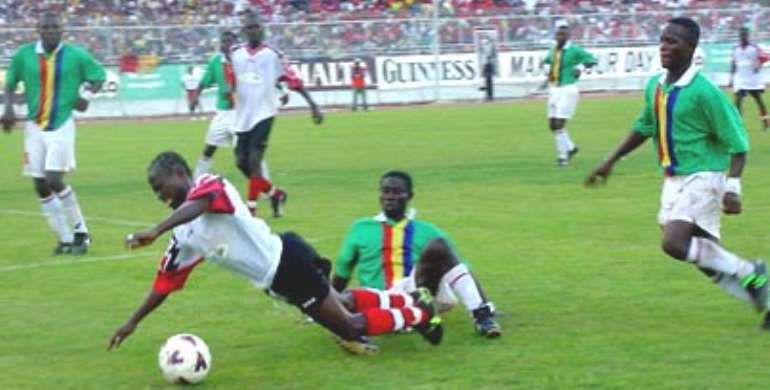 Hearts of Oak and Asante Kotoko return to high profile competition when they play in the decider for the 2004 Premier League championship in Accra on Sunday.

The two sides suffered similar fates when they were kicked out of their CAF Champions League last week, and now battle to decide the winner of the prolonged 2004 season.

Originally scheduled for March 13, the game was postponed to allow Kotoko appear before the GFA Disciplinary Committee for withdrawing from their Coca-Cola Top 4 game against Hearts of Lions in Accra last January.

Before it reached that stage, however, Hearts' threat to shelve the game in solidarity with their 13 colleagues on GHALCA (the welfare body of Ghanaian football clubs) who played in last year's two-zone league championship to isolate Kotoko in all competitions appeared real.

A week ago after GHALCA accepted Kotoko's formal apology, which had been the only source of difference between the two sides, the decider became a reality, replacing egos that would have handed Kotoko their 20th league title without kicking a ball in the decider.

With the path clear, both teams now have to deal with their own demoralising elimination from the continental championship. Kotoko, as well as Hearts, challenge in what will be the two sides' only clash in the 2004 league.

The game also evokes contrasting memories of similar deciders that have happened between the two sides in the past.

Like their other clashes in the 2004 season when Hearts triumphed to win the inaugural CAF Confederation Cup, Kotoko's luck have deserted them many a time at such grand moments.

Not even during the periods when the odds remained in Kotoko's favour for the simple reason of their greater talents did they find the means to trample over their opponents in crunchy deciders.

The two-leg tie that handed Hearts their latest continental silverware in January was just a manifestation of a trend that had been established even in the golden days of Opoku Nti, Rauf Iddi, Addae Kyenkenhene, Joe Debra, Michael Osei, Thomas Boakye, Kwesi Appiah, Sarfo Gyamfi and Fimpong Manso.

Hearts' crave to guard this psychological advantage comes under a difficult test in the wake of the low morale that engulfed the club before and after their elimination from Africa.

Skipper Amankwah Mireku's unfortunate experience with the fans sums the difficulty ahead of the club.

With or without Coach Jones Attuquayefio, Hearts will still fight to have the services of Bernard Dong-Bortey and Prince Tagoe, their biggest scoring hopes, and pray for the recovery of Acquaah Harrison to increase their options in defence.

Kotoko might not be with Joe Hendricks or goalkeeper George Owu, but will count on strikers Michael Osei and Nana Arhin Duah, Coach Malik Jabir's dependable pair of options upfront, for epoch-making tie.