Yet Another Low For Ghana Soccer 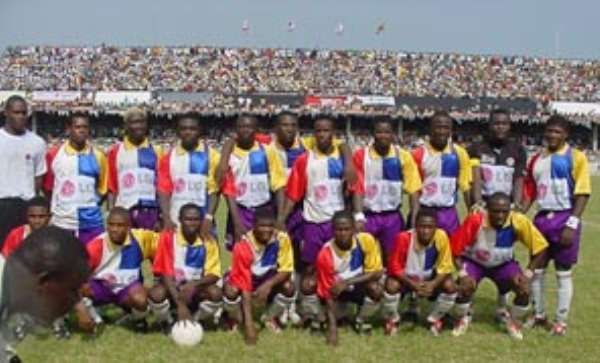 ....Kotoko, Hearts OUT - Faisal Through For the second time in two years, Ghana will be absent from CAF Champions league after Hearts of Oak & Kumasi Asante Kotoko were knocked out from the competition this weekend Accra Hearts of oak beat Dolphins of Nigeria 2-1 today at the Accra sports stadium, but go out on a 5-2 aggregate. Saturday, March 20 -- Kumasi Asante Kotoko are out of this years CAF Champions league after going down to two first half goals to FAR Rabat of Morocco at Rabat's FUS Stadium The Gunners went ahead 4 minutes into the first half thanks to Mohammed Ajedou's diving header to level the score to 1-1 on aggregate. Striker Mohammed Armoumen scored the second 3 minutes before the break from an excellent right-footed free-kick from just outside the area. The Rabat side will play Tunisia's sturdy Etoile du Sahel in the third round Goalkeeper Louis Quainoo was hit with a missle thrown by the crowd just before kick-off but he managed to feature in post for Kotoko. Kotoko won the first leg 1-0 in Kumasi and thus go out on a 2-1 aggregate Kotoko Louis Quainoo,Dan Aquah,Godfred Yeboah,Issah Ahmed,William Thompson,Michael Asante,Michael Osei,Yussif Chipsah,Osei Kwame,Edmund Owusu-Ansah,Elvis Opoku.
Results of African Confederation Cup second round, second leg matches played on Saturday:
In Louga: ASC Ndiambour (Senegal) 1 King Faisal Babes 1 (First leg: 0-3; King Faisal Babes won 4-1 on aggregate)