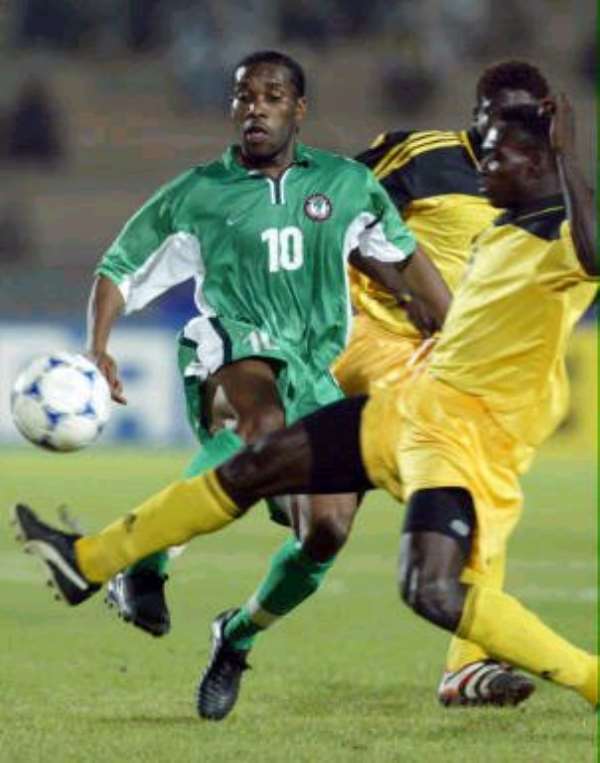 Cecil Jones Attuquayefio is the coach of Accra Hearts of Oak, Enyimba's opponents in last Sunday's Super Cup match in Aba. The vastly experienced Ghanaian, who made history last year by leading Republic of Benin to its first appearance at the African Nations Cup in Tunisia, was once the chief coach of Ghana's national team, the Black Stars, which he left in a rather controversial manner.

In a chat with reporters at the Enyimba Stadium, Aba, Attuquayefio talks on the myriad of problems affecting the development of the game in Ghana and Africa generally, the CAF awards, which he said did not reflect the true opinion of Africans. He also spoke on Enyimba and the way forward for African football.

When news men took him up on the recent CAF African Footballer of the Year Award won by Cameroun's Samuel Eto'o Fils, Attuquayefio said that the selection of the Barcelona striker did not reflect the opinion of African football followers, adding that "Okocha is the best African player in the world, whether CAF likes it or not. He has, and always will be a class ahead of every other player in Africa because of his immense skill, which are extraordinary."

So, if that is his opinion, why did Ghana vote for Eto'o instead of Okocha? "Ghanaians have loved Okocha ever since he played with Anthony Yeboah in Germany. So, why should we not vote for him? It was probably the foreign coach, who does not have much knowledge of African footballers that did not vote for Okocha. Even the little boys back n Ghana love Okocha because he is truly great," Attuquayefio said.

On the problems of Ghanaian football and that of the larger African soccer, the coach, who is still embroiled in a prolonged contractual negotiations with his present club, Accra Hearts of Oak, said Africans have potential to rule the world provided the right things are put in place.

To him, the clamour by indigenous coaches to be given the chance to handle their national football teams have been on for long, especially since some of the foreign technical advisers have not proved to be better than the local ones. He said such agitations will continue.

He said the indigenous coaches believe that "given the opportunity and the same resources available to their foreign counterparts, they will lead their teams to greater height," while also blaming their plight on the insensitivity of the football administrators to the yearnings and aspirations of their people, including the local coaches.

"Until the authorities change their attitude and realise that it is not only when it comes to the Under-17, Under-20 and the Under-23 teams that indigenous coaches are called to service, until they realise that these coaches who nurtured the players from the age group stage, should also be given the opportunity to handle them in the senior team, things may not improve as we want.

"Really, it beats my imagination why our people think the whiteman is a better coach than the local coaches. But how many white coaches can work under the same coaches we are compelled to do our job? Most of the time, we do all the things we do because of the love for our country, but the authorities didn't appreciate that. It is very unfortunate," the tactician said.

When asked about the problems of Ghanaian football, he was quick to point accusing fingers at the football authorities, which he said have been shying away from their responsibilities.

"It is very difficult for some of us to talk about Ghanaian football because in the first place it involves a lot of organs, whose contributions help to develop football.

"We have to put a lot of infrastructure in place, we should have policies that would aid the growth of the game. One of such resources is to train coaches whose jobs are to harness the resources available. And then, the players should be willing to play. It is not just putting 11 players into a game and expecting to win.

"Ghana has relied mostly on the local players, which has not helped the national team. Until we bring on a policy that gives the local coaches the power to manage the Black Stars and choose their players from anywhere in the world, the game will continue to witness the pitfalls it has been seeing in recent times," he said.

Despite all the problems affecting the growth of the game, the coach still believes that the Black Stars can regain its lost place in African football if certain things are done right.

"Those who manage football in Ghana, and this affects many African countries, should listen to the suggestion of the indigenous coaches and other people who are truly involved in the game. Their suggestions should be regarded as a good ingredient for the development of the game.

"But when our suggestions or advice is thrown away because nobody respects the local coaches, the very organ that should help develop the game will go away with them.

"This same people, who prefer the foreign coaches to the local ones, shamelessly, run to us when there is problem. It has happened like that in so many instances. Yet, they have not learnt anything," Attuquayefio said.

He, however, believes that Ghana could qualify for the Germany 2006 World Cup going by the way everybody concerned in the pursuit have responded to the quest.

"It appears we have a good chance because the players, right from the beginning, have been regular in honouring the national team's call. And I hope that they will continue like that in all the qualifiers because they stand to gain a lot from Ghana being there," he said.

Looking at his stay in Benin Republic, where he was regarded as a messiah, having taking them to their first ever Nations Cup appears; Attuquayefio blames his exit from the West African country on Africans' penchant to treat their coaches without respect.

"They tried to treat me the way African countries treat local coaches. All over Africa, we don't have respect for our indigenous coaches. So, when they refused to honour my contractual terms, I decided to leave. I am happy, though, that I left a good foundation for them to build on.

"The same thing tried to happen at Heart, but that is between my agents and the team," the 56-year-old coach said.

Attuquayefio, who believes that it will take extraordinary effort to dislodge Enyimba from the pinnacle of African club football, however, says that his team would have shocked the Aba-based club, if not for the misfortune that be-fell his side early in the match. But he predicted that Accra Hearts of Oak qualifier against Dolphin of Port Harcourt would be different from last Sunday's Super Cup match.

"Enyimba have been giants of Africa for two years. We came into the game knowing what was in store for us. We came also to show what we could do it. We played them to a stand sill in 90 minutes, before it became necessary for us to go to extra time.

"We had a numerical disadvantage in the match, which accounted for the result. At a point in the extra time, we conceded two goals because we did not have the numerical strength. We were willing to play, although it was very difficult in view of the standard of play.

"But against Dolphin, it will be quite different. I don't know Dolphin, but I heard they are Nigerian champions and comparatively, between them and Enyimba, it is difficult to decide who is the best. We have had an opportunity to play against Enyimba, so we want to assess Dolphin from there.

"We will go ahead to play knowing that we will be meeting a team as strong as Enyimba. We cannot predict the outcome of the match now. But we will go ahead with our plans hoping that when we comeback to Nigeria, we will play an improved game," Attuquayefio said.

The former Black Stars coach, who led Ghana to a goaless draw with Nigeria in one of the qualifying matches for Japan/Korea 2002 World Cup, rates African club football high, going by the standard displayed by Enyimba and Hearts of Oak.

He said the problem of local football in the continent was the continuous exodus of promising stars to Europe, which has in fact, driven spectators away from the stands.

"I think we have improved, but there is room for more improvement. And when there is consistency in policy, players' recruitment, football will improve tremendously.

"But if the clubs in Europe and other places are allowed to continue taking our players away when there is serious football going in Africa, then the standard will not improve. It is simple, when the best players are not there, the football will not be as all of us expected," he explains.`