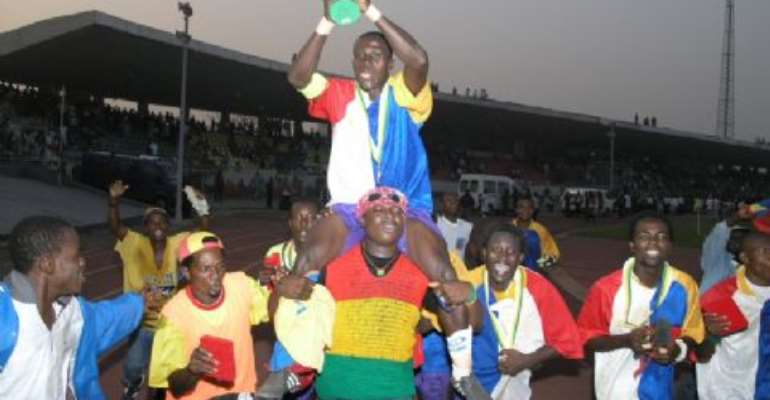 - Enyimba Coach, Emordi charges his boys Nigeria's African champions Enyimba FC seek to add another double when they confront Ghana's Hearts of Oak at the Enyimba International Stadium, Aba this afternoon, in the annual African Super Cup clash between the winners of the Champions League and the Confederation Cup champions.

Enyimba coach, Okey Emordi, still felicitating after being named the Coach of the Year at the CAF African Football Awards in Durban on Tuesday, sends out his army for their first real challenge since beating Tunisia's Etoile du Sahel to lift a second Champions League trophy on the trot in Abuja on December 12.

A number of the stars of that triumph has left, leaving the former Nigerian international with no choice but to re-draft the team's approach with the new set of players, who he will have to manage with the oldies in camp. Goalkeeper Vincent Enyeama, named the Best Champions League player for last season, has left for trials abroad, while defenders Uga Opara and Obinna Nwaneri, and midfield trojans Onyekachi Okonkwo ad Damien Udeh are no longer in Aba.

Opara and Okonkwo are in South Africa with Orlando Pirates and Udeh and Nwaneri joined top Tunisian side Esperance, whom Emyimba spanked on penalties to reach last year's Champions League final.

The setting is unpredictable in Aba today, with a strong anti-CAF bile amongst Nigerians following Tuesday's perceived injustice at the annual Football Awards in South Africa, where Super Eagles captain Austin Okocha was incredibly judged third best in Africa after dominating the African Nations Cup finals in Tunisia.

Nigerians still feel the angst and Issa Hayatou, the Cameroonian President of the Confederation of African Football, should not expect the usual extra-warm reception when he steps into the Enyimba Stadium. On the pitch, football is sure to win with some exceptional displays expected from both teams, in line with their stature as African champions. Hearts won the Confederation Cup by beating compatriots Asante Kotoko on penalties after both legs ended in a draw, just as Enyimba had to ride the lottery of penalties to prevail over stubborn Tunisian hunters Etoile in Abuja after both teams were tied 3-3 at the end.

The special garb around this afternoon's clash is that both teams have won the trophy before. Enyimba defeated Etoile Sahel 1-0 in Aba on February 22 last year to add that to their Champions League diadem.

In 2000, after winning the Champions League by defeating another Tunisian side Esperance, Hearts lifted the Super Cup in Kumasi by defeating Zamalek of Egypt 2-0. Hearts coach, Cecil Jones Attuquayefio (the man who has won three continental trophies for them in four years), is moaning the absence of a number of stars who are unavailable as a result of injury of trials abroad.

Emmanuel Osei Kuffour, hero of their 2000 Champions League win, has joined a club in Iran, while Bernard Don Bortey and Louis Agyeman are in Europe. Prince Tagoe is also somewhere attending trials and defenders Michael Donkor (hero of their penalty win over Kotoko last month) and Dan Quaye are injured.

Attuquayefio, a wily old fox who took Benin Republic to their African Nations Cup debut last year, is a man without illusions: "It would be foolish for anyone to underrate Enyimba, taking their experience into cognizance".

Enyimba chairman, Felix Anyansi-Agu says he has no doubt the Aba millionaires would carry the day to set off another triumphant year on the continental front.

"My brother, we're already thinking of winning the Champions League trophy for keeps and representing Africa at the FIFA World Clubs Cup in Japan. The Super Cup will set off our season brilliantly, that is all".