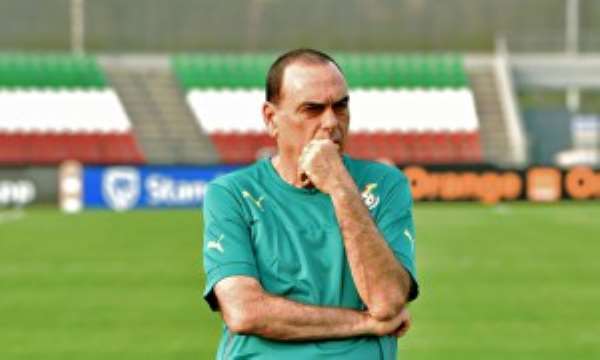 GHANAsoccernet.com headquarters revealed on Monday that the former Chelsea boss has not received his financial entitlements for the past three months.

But the Ghana FA has moved quickly to quell the reports which has gone viral in the West African nation.

"We wish to put it on record that the report is inaccurate as GNPC has been steadfastly resolute and committed to its contractual obligations to the Black Stars," part of the statement read

We also wish to state that The Ministry of Youth and Sports has not sought to influence the implementation of the sponsorship agreement between GNPC and GFA.

"The GFA wishes to assure Ghanaians that coach Avram Grant is in full charge of the Black Stars and has not expressed any desire of leaving his post.

"GNPC is a highly valued partner of the Black Stars and has not reneged on its contractual obligations to the team since it assumed the role of the headline sponsor of the Senior National Team.

"The GFA will continue to count on the support of GNPC in future for the Black Stars and other activities connected to sports in the country."

The former Chelsea boss signed a 27-month deal to take over from Maxwell Konadu, who had been in temporary charge since Kwesi Appiah left in September, 2014.

He was appointed ahead of Spaniard Juan Ignacio Martinez and former Switzerland assistant coach Michel Pont.

His contract will finish at the end of February 2017 - after that year's Africa Cup of Nations finals.

The Ghana Football Association gave Grant a target of "doing well" at the 2015 Africa Cup of Nations in Equatorial Guinea - and to win the crown in Gabon in 2017.

But recent tension between the country's sports minister Nii Lantey Vanderpuije and the Ghana FA has thrown his long-term future in doubt.

The tension between the two parties are well documented with Ghana FA boss Kwesi Nyantakyi labeling the tough-talking minister as a 'serial-caller'  and amateurish.

It appears Grant's romance with Ghana will come to an end after the 2017 Africa Cup of Nations with the FA insisting it will not stand in the way of the gaffer if he decides to quit at the end of the tournament in February.

Grant himself has not ruled out a return to England after coming in for massive criticism for his absence from the country even though he has achieved good results with the Black Stars.

He guided the Black Stars to a second-placed finish at the 2015 Africa Cup of Nations and supervised the side's qualification to the 2017 edition in Gabon as well as the group phase of the 2018 World Cup qualifier.

It's feared the unresolved feud between the two parties could hurt the country's chances of ending a long-wait for an African crown in Gabon early next year and more crucially qualifying to the 2018 World Cup in Russia.

The Black Stars take on the Cranes in the first match of the qualifying campaign in Tamale on October 7 amid the teething problems.

Grant is the 32nd head coach of the Black Stars with the country appointing three caretaker coaches in between the period.

Grant, until his appointment as Ghana coach was the technical director at Thai side BEC Tero Sasana.

His previous coaching role was at Partizan Belgrade from 2012 to 2014, during which time he steered the club to their fifth consecutive Serbian championship.

As well as spells in charge of English clubs Portsmouth and West Ham, Grant has international experience having spent four years at the helm of Israel's national side.