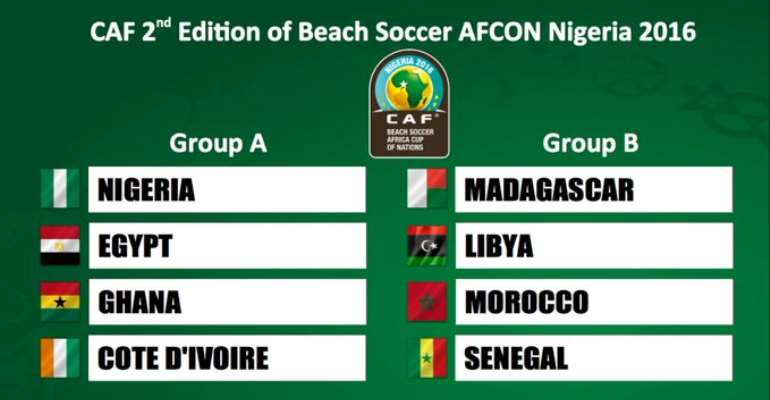 The Black Sharks of Ghana have been drawn in group A for the second edition of the 2016 CAF Beach Soccer again.

To have a realistic chance of advancing out of their group in Lagos, Ghana would have to overcome the giants of African Beach Soccer in December including hosts Nigeria, former champions Ivory Coast and the number one ranked North African side Egypt.

The Black Sharks would be seen as the slight underdogs against more seasoned African Beach Soccer campaigners. However, the prospect of upsetting the big boys could be a key motivating factor as well as a ticket to the 2017 Beach Soccer World Cup in the Bahamas.

The Afcon format in Lagos is very simple.
The round robin group winners and runners up advance to the semi finals where the two winners automatically qualify for the World Cup.

CAF is yet to announce a tournament appearance fee or prize money for the eventual winners.

This means that as in the previous edition in Seychelles, participating countries would have to rely on their respective Football Associations for support.

The Ghana Black Sharks were first constituted in 2013 and is currently ranked number 7 in Africa by CAF and 47th by FIFA.

Madagascar are the defending champions after defeating Senegal in the final of the last edition.