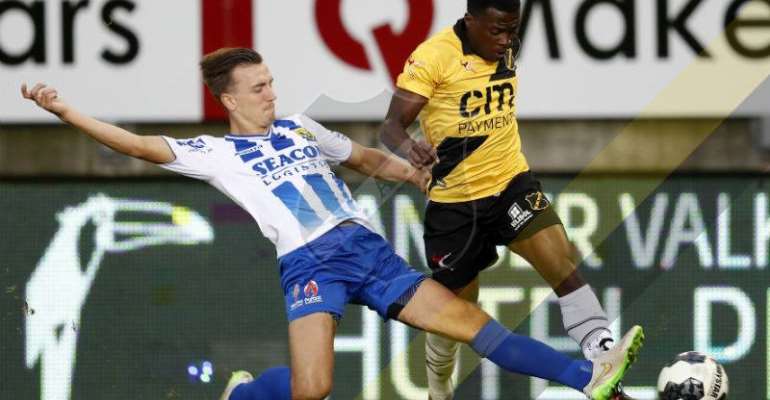 Ghanaian youth midfielder Thomas Agyepong suffered elimination from the Dutch Cup on Tuesday with his NAC Breda side.

Agyepong, a Manchester City loanee, climbed off the bench before the start of the second half to play for Breda who were down by a first-half brace from Torino Hunte as VVV Venlo went ahead to win the tie 2-0 at the Rat Verlegh Stadion.

While the former Right to Dream Academy graduate was introduced in the second-half to help rescue his side, Dutch-born Ghanaian forward Johnathan Opoku Agyemang was unused Venlo.

Meanwhile former Ghana U23 attacker Raymond Gyasi was brought on in the second-half by FC Cambuur who snatched a narrow 1-0 win over third-tier Rijnvogels. Dutch-born defender Bright Ampong Zweistra played the entire duration of the game for the losers.

Elsewhere at the Sportpark 't Slot, FC Groningen made meal of a disgruntled Capelle side after trouncing them 4-0. 19-year-old Ghanaian attacker Festus Attobra warmed the bench for the losers.

Accra-born former Dutch youth international Fred Benson inspired RKC Waalwijk to a 3-0 away win over EVV. The veteran striker scored the opening goal for the visitors.