Ghana Premier League: Overall statistics after last round of matches 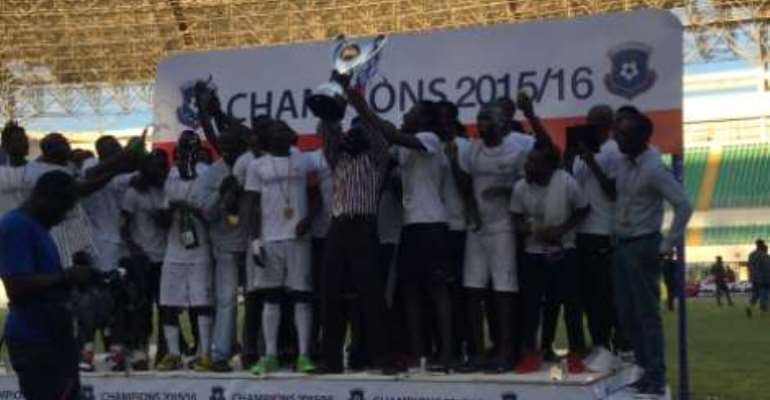 Wa All Stars were crowned champions at Sekondi, despite 0-3 thrashing by relegation bound Hasaacas.

The curtain was drawn on the Ghana Premier League, after match day 30 and finally, the boys were separated from the men. New Edubiase United, Sekondi Hasaacas and Techiman City bid a farewell to the top-flight division of Ghana football.

Asante Kotoko failed to manage a top-four finish, despite beating WAFA 2-1 on the last day of the league.

Medeama and the Porcupine Warriors earned 46 points apiece, but in the end, it was the Tarkwa lads who picked the fourth spot on the league log through a superior head to head

:They drew 2-2 in Kumasi against Kotoko and the return encounter at Tarkwa ended 1-1 and since Medeama scored two away goals they beat Kotoko to the fourth place.

Hearts of Oak placed 3rd on the league table, after they came from a goal down to beat relegation bound New Edubiase United 1-3 at Bekwai.

Inter Allies who had their destiny in their hands battled Aduana Stars to a 1-1 draw at Dormaa to survive in the league.

Berekum Chelsea condemned Techiman City to relegation in the battle for survival in the all Brong Ahafo affair.

Dwarfs stunned Dreams FC 0-2 defeat at Dawu to put their heads above the water.

Dethroned champions, AshGold matched Medeama boot for boot at Tarwa and in the end drew 3-3 in a titanic clash.

General statistics in the Ghana Premier League
A total of 240 matches have been played thus far.
A total of 499 goals were scored, which is an average of 2.079 goals per game.

Aduana Stars have scored the highest number of goals, scoring 42 in the process.

New Edubiase United let in 45 goals, which were the most goals conceded

Wa All Stars were the team with the best defence, conceding 22 goals

Wa All Stars won more league games than any other side: 15 wins in 30 games

Ashgold drew sixteen (16) games which were the most by a club.

The least number of goals scored on a match day were 10, which happened on match day 19.

The highest goals in a single game came on match day 29 when AshGold defeated Kotoko 5-3 in an 8-goal thriller.

The highest number of goals scored by a single club in a match were five goals by WAFA in a 5-0 win over Hasaacas on match day 3, Liberty Professionals when they defeated Ashgold 5-1 on match day 6, AshGold 5-3 Kotoko and Ebusua Dwarfs 5-1 both recorded on match day 29.

Shafiu Mumuni scored the fastest goal of the season under 10 seconds on match day 30 for AshGold in their 3-3 draw against Medeama.

Dauda Mohammed scored the fastest goal of the first half of the season. It came under one (1) minute against Dreams FC at Dawu on match day 8.

Charles Boateng was the first player to score a goal this season, when his opener aided WAFA to edge Kotoko 2-0, with Samuel Tetteh scoring the other on the opening day of the Ghana Premier League

Emmanuel Ocran of Wa All Stars and Abednego Tetteh of Bechem United were the first two players to score a hat-trick in the second round of the season in their outfits victory against Dreams FC and Hearts of Oak respectively. Latif Blessing finished the season in a grand style, as he bagged his second hat-trick in a 3-1 win against Bechem United to crowned it with the goal king award/

The first player to be sent off was Eric Kumi, for receiving the 2nd booking for taking off his shirt, after scoring against Medeama.

Emmanuel Hayford and Lord Ofushene of Dreams FC and Inter Allies respectively were the first two persons to see a direct red card, following a scuffle between them in their sides 2-2 draw.