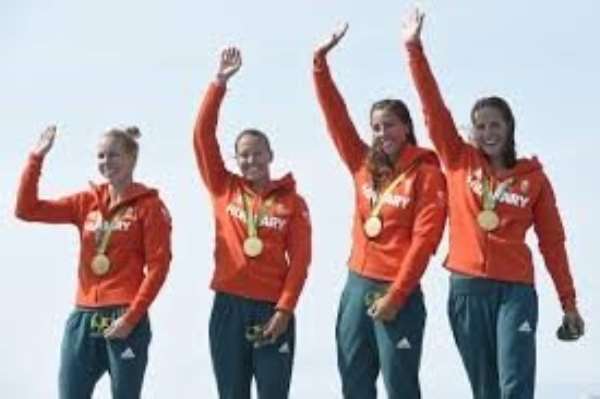 Accra, Sept. 18, GNA - In Rio, Hungary was ranked 12th on the overall table with eight gold medals in swimming, fencing and kayak-canoeing.

Comparing to its size and population Hungary is one of the most successful countries in the history of the Olympic Games with 502 medals.

In the past 10 years nearly 200 modern sports facilities were successfully renewed.

'One of the major projects these days is developing the brand new aquatics centre in the heart of Budapest.

'The 20,000 spectators capacity swimming complex is going to host the FINA World Championship in 2017,' the statement said.

Hungary is a landlocked Central European country that excels in various types of sports - having showed great success in sports like swimming, water polo, kayak-canoe, fencing, athletics (track and field), table tennis and weightlifting among others.

However football has a special place in the heart of Hungarians.

Hungary has a very rich football history with famous victories and medals. These include three Olympic medals, multiple runners-up in the FIFA World Cup and UEFA European Football Championship.

'Ferenc Puskas, the best goal scorer of the 20th century, is the hallmark of the great Hungarian 'golden team' of the 1950s.

'As a matter of fact, FIFA dedicated him the latest award they have created, the Puskas Award.

'The team also has the honour of having the longest winning streak in football history being unbeatable in 31 games within a span of four years that included what has come to be known as 'The Match of the Century' against England in 1953.

'Hungary won 6:3 against England, which had been unbeaten for 90 years beforehand,' the statement said.

It said the sport professionals in Hungary who are PE teachers and sport coaches have always been able to educate and train athletes on a high international level.

These athletes had to be selected from a limited source, due to the limited number of available people.

The statement noted that experience shows that the majority of the Hungarian athletes who became Olympic and World Champions were able to maintain their sport success for a long period of time.

This could only be reached when the trained sport coaches are able to adjust to the rapidly changing circumstances one could observe in the sport world today comprising changing rules, new disciplines and adaptation to changing training and competition circumstances.

Ghana and Hungary have a common point in the history of football. JÃ³zsef Ember was a Hungarian football coach who managed the national football team of Ghana from 1960 to 1962.

Hungary places a special emphasis on the intensification of the sports relations.

On May 9, ZoltÃ¡n Balog, Minister of Human Capacities of Hungary and Nii Lante Vanderpuye, Minister of Youth and Sports of Ghana signed the Memorandum of Understanding on Cooperation in the Fields of Sports and Youth in Accra.

Hungary is ready to share experience in swimming, water polo, kayak-canoeing, judo and archery with its Ghanaian partners.

Hungary in addition has a solid know-how for stadium constructions and operating football academies and also willing to share knowledge in the field of e-coaching.