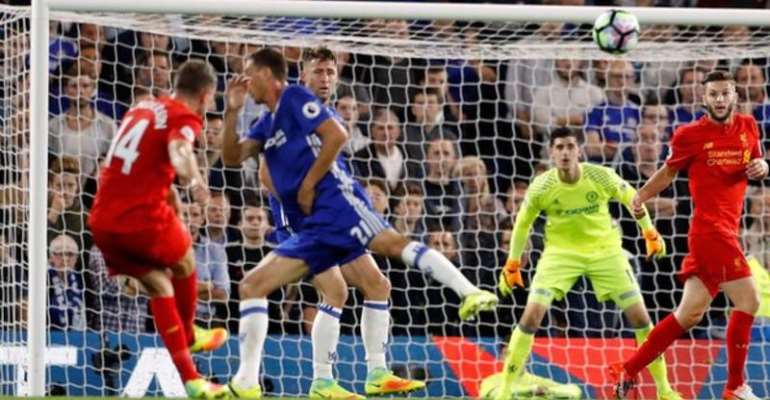 Liverpool continued to gather impressive momentum in the Premier League as they inflicted Antonio Conte’s first loss as Chelsea manager with a deserved victory at Stamford Bridge to move into the top four.

Reds boss Jurgen Klopp was a winner at Stamford Bridge last season – and this was three points Liverpool fully merited to add to a triumph at Arsenal on the opening weekend of the season and a draw at Tottenham.

Liverpool were keen to build on the 4-1 thrashing of champions Leicester City at Anfield last weekend and they over-ran Chelsea to take control by half-time through Dejan Lovren’s close range finish and captain Jordan Henderson’s spectacular 25-yard strike.

Chelsea, with £32m defender David Luiz making his first appearance since returning to Chelsea from Paris St-Germain as replacement for the injured John Terry, pulled one back through Diego Costa but their laboured performance deserved nothing from this game.

Liverpool may yet remain on the margins of the title race but victories such as this, added to the excellent 4-3 win at Arsenal and a fine display in the 1-1 draw at Tottenham, will certainly see those at Anfield exuding quiet confidence.

Klopp was without influential forward Roberto Firmino here, ruled out with a groin problem, a severe blow as the Brazilian’s work-rate, tactical awareness and goal threat has made him a vital component in Liverpool’s success against the likes of Chelsea, Manchester City and Manchester United since the German’s arrival.

It made little difference as Liverpool’s prodigious work ethic, a staple of Klopp’s style, pressured Chelsea into submission and gave them a constant goal threat as well as a defensive shield.

Two of Liverpool’s big summer buys made an impact, with Sadio Mane giving them real pace and menace and Georginio Wijnaldum offering a steadying presence in midfield.

Meanwhile, the reliable James Milner illustrated once again why Klopp was not prepared to answer demands to rush into the market and buy a left-back.

Liverpool are still a work in progress and will still have questions to answer when they produce performances such as that which saw them lose at Burnley earlier this season – but once again they showed at Stamford Bridge that the charismatic Klopp is taking them in the right direction.

Chelsea still rely on Terry
Chelsea’s decision to agree a new one-year contract with captain Terry may have been belated, after a spell when it looked like his Stamford Bridge career was coming to a close.

On this evidence, however, it looks a very wise move because the 35-year-old centre-back still has a key role to play as Chelsea make their latest managerial transition into the Conte era.

Chelsea, without Terry, lacked direction and leadership in defence on Friday, even though they were able to re-introduce the returning Luiz as Terry sat this one out through injury.

The ex-England captain is not only still a formidable defender but he is the consummate organiser and would surely have lessened the chances of the shambolic marking that left Lovren in splendid isolation to turn in Liverpool’s opening goal.

Conte’s reality check
Conte’s animated touchline body language screamed out frustration as Chelsea struggled to exert any sustained pressure on Liverpool and were far too ponderous for long periods.

He made a good start at Chelsea after leaving his job as Italy coach, albeit needing late winners from Costa against West Ham United and Watford before a convincing win against Burnley.

The size of his task was hinted at by the way they lost control of a game they were winning before drawing at Swansea City, and here they were second best throughout.

As stated before, they miss Terry and experienced figures such as Nemanja Matic and Branislav Ivanovic are starting to look frayed around the edges.

Costa cannot dig them out of trouble every time and there was even a question mark over Conte’s approach, taking 83 minutes to make a change when it was clear something needed to be done.

When it came, it was a triple substitution as Victor Moses, Pedro and Cesc Fabregas came on for Willian, Oscar and Matic, although there was widespread surprise that £33m striker Michy Batshuayi was not given an opportunity.

Conte, perhaps understandably, is learning the ways of the Premier League. And there is plenty for him to learn at Chelsea.

Post-match reaction
Chelsea manager Antonio Conte:
“We conceded the goals in a strange way. They took the free-kick quickly for the first goal and it was a great shot from a long distance for the second but if we are in the right position he must not receive the ball unmarked.

“When you want to think like a great team you must pay attention in every moment.

“We played with good intensity and anger in the second half. We scored a goal and could have scored another with Diego Costa. We played a good second half.

“I must work more to improve my players. Defeats are never good. We know this, we must work and keep our concentration.”

Liverpool manager Jurgen Klopp:
“It was a satisfying win of course. From the first second we had unbelievably good movement. We were quick in mind. We did really well. We deserved the lead at half-time.

“We have to learn how to manage the game plan. So often this season Chelsea scored in the last few seconds with a direct style. But I can’t remember too many chances from them. We had a few moments where we weren’t so good but that’s normal against a good team.

“We played football like hell. It was really nice to watch. In the second half it was a bit more difficult. After their goal, we managed it well.”

Liverpool goalscorer Dejan Lovren:
“It is always a tough game here but I thought we did brilliantly. In the first half, I thought it was our best football of the season.

“It’s always good to score but the most important thing is the three points. The spirit is perfect so we just need to keep working.”