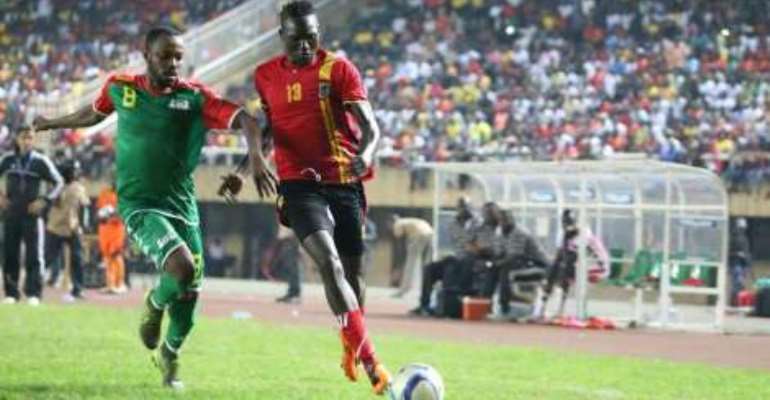 Uganda star Joseph Ochaya has warned his compatriots to brace themselves to be challenged by the hot climate of Tamale, the host city for their 2018 World Cup qualifying clash with Ghana .

Reports in recent days have emerged that the Ghana Football Association have decided on the Tamale Sports Stadium as the venue for the Group E opener.

Ochaya, who was based in Ghana for two years playing for giants Asante Kotoko, was speaking with Ugandan web publication Kawowo Sports.

'It's very hot in Tamale,' Ochaya said. 'And bad enough, they always love to play in the afternoon, which makes life difficult for whoever isn't used to the conditions."

Ochaya, recently named the Most Valuable Player of the Ugandan league, also added that he expects the Black Stars to have massive support in Tamale, as against the run of underwhelming support in recent matches played across Accra and Kumasi, a trend blamed on the after-effects of the disgraceful events from the 2014 Brazil World Cup. READ ALSO: Real Madrid fan died celebrating Alvaro Morata's winner

In their last competitive match in Accra, the Black Stars received the support of just over 4000 spectators in a stadium that has a capacity of 40,000 - the lowest attendance recorded in over a decade.

"Unlike Kumasi or Accra, the fans in Tamale are very patriotic,» Ochaya opined. «They support their team from start to finish even when they are not playing well. Elsewhere, the fans turn against their team."

The 20,000 capacity Tamale Stadium was constructed and opened ahead of the 2008 Africa Cup of Nations.

The Black Stars last played there during qualifying for Afcon 2015, beating Guinea 3-1.

Uganda will be hoping to outwit the heat and fans of Tamale in a bid to continue their two-match unbeaten run against three-time World Cup participants Ghana.

In their last two meetings, The Cranes drew 1-1 with the Stars in Kumasi and went on to win 1-0 in Kampala during the 2015 Afcon qualifiers.

Ochaya believes his side can frustrate Ghana for a third game running on October 7.

"If we can shut them out for the first quarter of the game, then we have a chance. They will take us more seriously this time round which can also be dangerous to our chances."