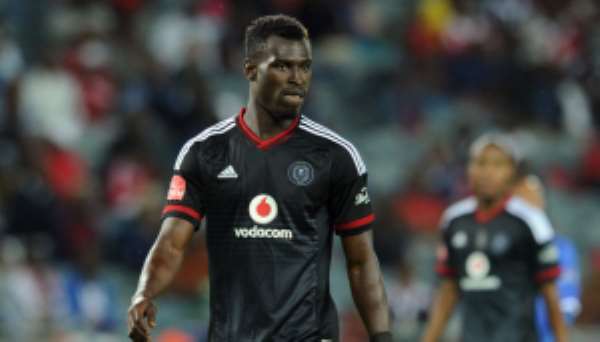 
Edwin Gyimah's long-term future with Orlando Pirates has been plunged into doubt after he had a serious bust-up with coach Mushin Ertugal, South African media have reported.

The Ghana international was left furious with his substitution during his side's 2-1 win over Ajax Cape Town in the South African Premier Soccer league game on Tuesday night.

EWN Sports reports, the 25-year-old nearly attacked the Turkish trainer at the Cape Town International Airport and used abusive language on him.

The reports further alleges, it took the intervention of captain Oupa Manyisa and other players to calm tempers.

The Johannesburg Airport Police also threatened to lock Gyimah up over his conduct.

The Ghanaian was replaced at the start of the second half after he received a silly yellow card during the game.

Tension between the pair have been building since the start of the season, where it's understood the Ghanaian has been unhappy with the way that he has been treated by the trainer.

It now leaves Gyimah in a difficult position, as coach Ertugal  would be open to the prospect of him leaving.

Mahama becoming President again is one of the greatest calam...
54 minutes ago