Dawn Of A Fresh Era: UEFA ushers in new leader 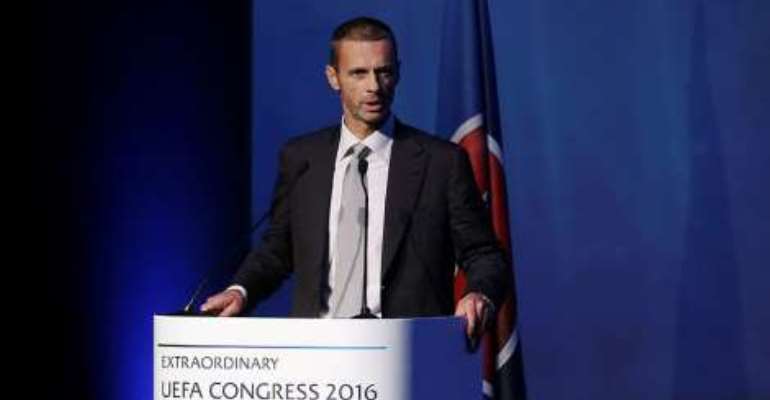 'Aleksandar and I have the same goal,' said Michael Van Praag on Wednesday morning in Athens, referring to his opponent in the race for UEFA's Presidency.

'We want a different UEFA; we want a better UEFA,' the Dutch FA Chief added. 'But he wanted to do it his way, and I wanted it my way.'

But, after the tension of secret ballot casting and result counting, Praag didn't have it his way. Aleksandar did.

Aleksandar Ceferin, the Slovenian FA Chief with a background in Law, romped to victory at the polls, securing 42 out of 55 member nation votes - a whopping 14 votes more than the majority quota of 28 votes required to lead European Football's governing body.

The Slovenian's victory was unsurprising, though. He had always been the favourite. Sources from his camp told the BBC ahead of Wednesday's elections that the he had received at least 40 pledges of support from most of Europe's FAs - among them Russia, Germany and France.

This backdrop left Praag's competitiveness in doubt. A one-time Ajax Chairman from 1989 to 2003 - in the process overseeing the club's most successful era - Praag, ahead of the elections, famously had the support of the English FA, and also the advantage of being on the UEFA Executive Committee, yet failed to benefit from both, polling only 14 votes. There were concerns about his age too, 68, especially in contrast with his competitor's, although he claimed on Wednesday that it would not be a problem because 'even the Rolling Stones perform well into their 70s.' Eventually, he couldn't perform as well at the polls though: he lost by a margin of 29 votes to his the 48-year-old Ceferin. READ MORE: Who is Aleksander Ceferin?

The other contender, Spain's Angel Maria Villar, pulled out last week. Maria Villar, 66, a long serving Head of the Spanish FA, had been acting as UEFA President even since the erstwhile President Michel Platini resigned in May.

Platini bid farewell to UEFA at the Extraordinary Congress in Athens before the elections, in the wake of a disgraceful ban from all football activities; a consequence of bribery allegations levelled against him by Swiss Prosecutors. He was revealed to have received a 'disloyal payment' amount of $2m from former FIFA President Sepp Blatter in 2011: a breach of ethics rules.

'I am certain that I committed not the slightest fault,» Platini told UEFA delegates in Athens in his final address after an eight-year reign. 'I am continuing to fight legally. Just simply know that my conscience is clear. You are going to continue this beautiful mission without me, for reasons that I do not wish to come back on. I want to thank everyone in this room who had the courage and loyalty to support me during the past months."

Ceferin, who has only five years of top level football administrative experience, having been boss of Slovenia's FA, the NZS, since 2011, is expected to see out the remainder of Platini's term - which lasts until 2019. Fresh elections will be held that year to determine who leads the body ahead of 2020 Euros, which will be a novelty, spread across 13 cities in 13 countries to mark Euros' 60th anniversary.

'It is a great honour, but also a great responsibility,» Ceferin said in his victory address. «It means a lot to me. My small and beautiful Slovenia is very proud of it, and I hope that one day you will also be proud of me."

Ceferin is expected to restore credibility to UEFA amid the taint of the Platini scandal. Once he begins work at UEFA's Headquarters in Nyon, Switzerland, he will be expected to address many key issues, the most dominant one being the controversial 'secret deal' - UEFA's decision to grant extra Champions League slots to its top four power players (England, Spain, Germany and Italy) from the 2018/19 season. Ceferin's opposition to this decision, announced in August, has been well documented. He has expressed disappointment at UEFA kowtowing to pressure from the Big Four, and has also called the bluff of these same countries to set up a 'European Super League', a bargaining chip to force the hand of UEFA into granting them 16 of the Champions League's 32 slots. Ceferin believes the Super League, which has been the subject of the Big Four's flirtation for many years, is 'out of question' and would create 'war with UEFA.' «We have to speak and have dialogue with the clubs and I think it can be solved,' Ceferin said immediately after his win.

Born on October 13, 1967, Ceferin is a married father of three who works and resides in Ljubljana, the Slovenian capital, where for the last five years he has been juggling the responsibilities of running his own law firm in addition to his Slovenian FA Presidency.

Ceferin has claimed that he is 'not a part of the old establishment' of UEFA - unlike Praag and Maria Villar - although he has served on UEFA's Legal Committee for the last five years. In addition to highlighting the fact that he has not been associated with either FIFA or UEFA in their scandal-ridden recent pasts, he has also extoled his virtues of being 'transparent' and a 'family man' - qualities he feels will help him redeem the trust and respect UEFA seems to have lost.

"I'm a man of conviction, a passionate man, a man of my own and a man of his word,» he said on Wednesday. «I'm not a showman. I have no ego issues and I'm not a man of unrealistic promises. Some people may have said that I'm not a leader, that I'm too young and too inexperienced to become the next UEFA president. Me a leader? I don't know. I cannot declare myself a leader. It's not because you repeat again and again loud and clear, 'I'm a leader', that you're a leader. If you have to do it, you're probably not a leader. I'm almost 50 years old and I'm chairing my own company and the Football Association of Slovenia for years now. You can say that I'm young and inexperienced but I honestly think it's disrespectful for all the presidents of small and medium-sized federations, who for 365 days a year have to do more with less. Presidents of these kinds of federations must be creative, strong and inspiring. And, believe me, we have experience."

The road to power has been anything but smooth for Ceferin, who has had to defend his reputation many times, including in the face of one suggestion that insinuated that he is into football administration to capitalize on the wealth. 'I have a very big law firm so I don't need it [the presidency] for my CV or to get something for me personally,' he claimed.

Again, during campaigning, his opponent Praag, on twitter, shared an article titled 'The President's Man' from the website Josimar, a investigative piece that accused Ceferin of receiving support from a very influential puppet master: FIFA President Gianni Infantino. The Slovenian was quick to counter-accuse the Dutchman of 'making up stories to pollute the pre-election period', further describing the article and its claims as 'imagination.' Meanwhile, Infantino also distanced himself from the speculations.

"This is an insult on the intelligence of all the national associations and those who are voting," Infantino said after the vote on Wednesday. "You have seen there was a democratic process."

All is set for the football chief of the world's 59th ranked nation to assume what is arguably football's second most powerful political seat. He seems well equipped too, linguistically at least: he speaks at least five languages. On the flip side, there's some trivia to suggest a hard-core character: he has a Black Belt in Karate and has reportedly crossed the Sahara Desert on five different occasions, all for fun - four times in a car and including once on a motorbike.

Police smoke out Shatta Wale, handcuff him for faking gun at...
36 minutes ago