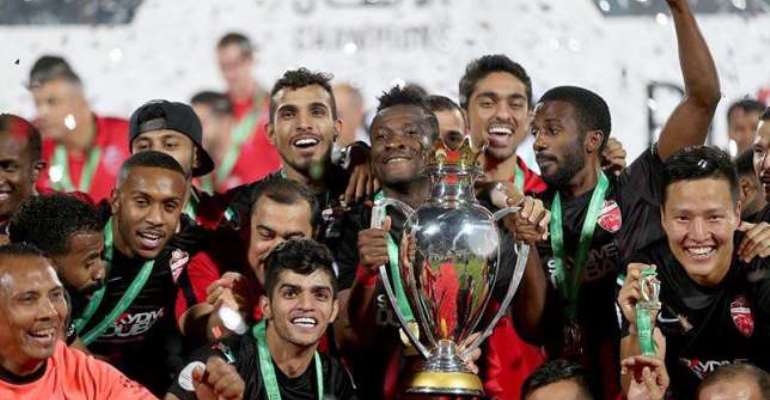 Black Stars captain Asamoah Gyan has expressed delight after playing a part in his new side's win of the Super Cup over Al Jazira.

The striker, who started from the bench, replacing Al Hamadi few minutes to the end of the game on Tuesday, has pledged to deliver his best shot this season.

Gyan, who has made full recovery from injury is not a new comer in the Gulf League, having distinguished himself as one of the prolific scorers before moving to Chinese outfit Shanghai SIPG.

He said in an interview that:“We are indeed glad to have won this trophy, it's a symbol of hard work, it doesn't matter the number of times you win, each one comes with a different feeling.”

“It's a morale booster, I mean lifting a trophy like we have done today, and I pray we continue in this same vein I am settling  and peaking by the day. I am adhering strictly to instructions from the technical bench, and when I take off fully, I will do what I do best-scoring.”

“Like I indicated earlier, some petty medical errors I committed in China robbed me of my best, but I have taken those lessons in good faith and promise to replicate my best form this season.”

Ahli scored first few minutes before the break through Mohammed Fawzi's own goal and later increased the tally from the spot courtesy  Lima.

Thiago Neves pulled one back but it was not enough to save his side.