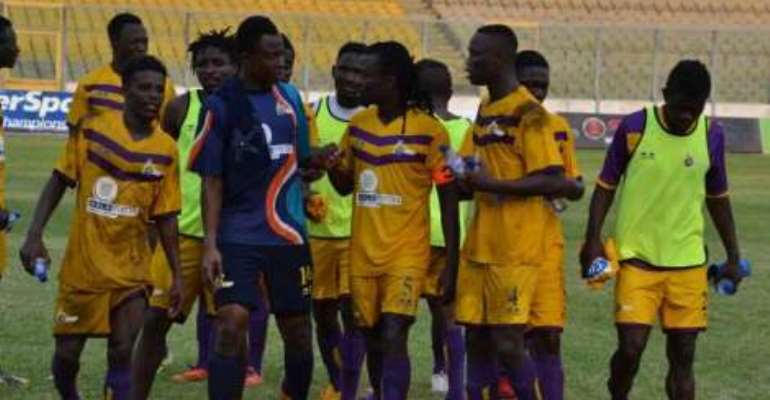 Hearts of Oak lost 0-1 at home to Medeama on match day 29 of the 2016 Ghana Premier League on Wednesday at the Accra Sports Stadium.

Akwasi Donsu scored late in the game with a powerful strike after they dominated the home side from start to finish.

Medeaam SC were the better side in first ten minutes of the game as they pinched the Phobians midfield - they run riot Hearts of Oak down the left but Inusah Musah foiled Kwame Boahene's crosses.

Two minutes later, the away side nearly got stunned but Patrick Razak failed to lift the ball over onrushing Daniel Agyei after he was put through on goal by Isaac Mensah. Medeama SC then took over the game but they failed to break the Phobians' defense.

The Tarkwa giants took advantage of Hearts of Oak disjointed play as they string their passes together putting the home side under intense pressure but Accra giants' defenders put their bodies on the line to prevent the 2015 FA Cup champions from scoring the first goal.

In the 29 minute, the former Premier League champions had their best moment in the game, after Foovi Aguidi thread Musah Ibrahim on goal but the young forward blasted his shot over. That moment seemed to have energized the Phobians, as a minute later Aguidi tried an audacious 35 yard volley but Daniel Agyei stood to the test.

The tempo of the game went down but Medeama were simply the better side , however, on the brink of half time Aguidi benefited from an unfortunate pass but the Togolese import with a weaker foot shot wide. Medeama swiftly responded as Akwasi Donsu headed wide Bismark Oppong's cross.

Nine minutes after the break, Medeama came close in getting the opener but Inusah Musah stretched to the limit to clear the ball from the feet of Bernard Ofori after Malik Akowuah sent him through on goal.

The Phobians struggled to foothold in the game as the Mauve and Yellows dominated the Accra giants in all department.  Hearts of Oak relied on the counter-attack and in the 57 minute Patrick Razak failed put the Phobians into the lead, the diminutive winger after he damied Paul Aidoo fell to the ground allowing Daniel Agyei to pick the ball with ease.

The tempo of the game increased, the Phobains out of nothing created a decent chance but Eric Kumi fimbly shot the ball into Agyei's hands, Medeama quickly reacted and Ofori shot wide.

Medeama in the 76 minute could have scored the first goal - the away side won the ball in the midfield and they went straight into attack, Benjamin Bature was then put through by Eric Kwakwa but the former shot wide.

The Phobians couldn't withstood Medeama's pressure as in the 81 minute Akwasi Donsu struck the first goal with a powerful left foot on the edge of Hearts of Oak penalty box after the Phobians failed to clear Amos Korankye's corner-kick.

Medeama pressed for the second goal but Samuel Akurugu prevented them from achieving that target after he made a world class save - the Phobians shot stopper tipped off Kwame Boahene's 20 yard strike.

The Phobians tried fighting back but Medeama curtailed their attack to win the game.