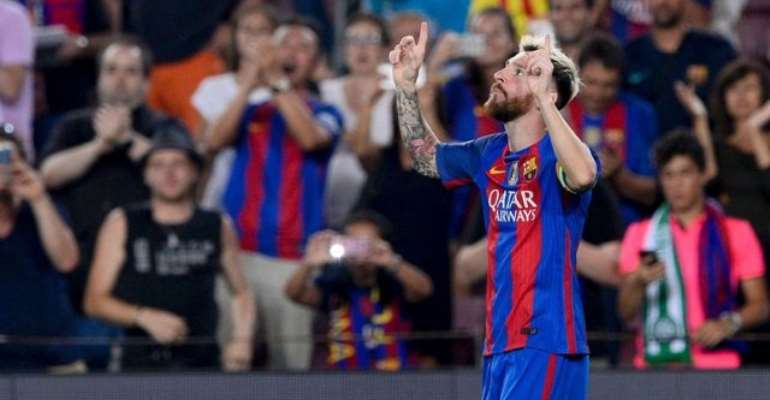 Lionel Messi hit a hat-trick as Celtic's Champions League campaign began with a 7-0 thrashing from Barcelona at the Nou Camp.

The Argentina forward took less than three minutes to open the scoring and after Moussa Dembele missed a penalty at the other end, he added a second before half-time.

Neymar made it three with a free-kick shortly after the restart and after Andres Iniesta got the fourth, Messi completed his treble and Luis Suarez netted a double too.

The defeat leaves Celtic bottom of Group C with Manchester City still to play Borussia Monchengladbach after their match was called off because of heavy rain.

This was the Glasgow side's first Champions League group fixture in three seasons after two failed attempts to reach that stage under former manager Ronny Deila.

Having taken just three points from a pool containing Barca, AC Milan and Ajax in 2013, they were hoping for a good start to build on their weekend derby win over Rangers.

Instead, they left the pitch smarting from a new record European loss which fell just one goal short of their biggest ever defeat, an 8-0 league reverse against Motherwell in 1937.

In addition to that, the result was also the biggest defeat of Brendan Rodgers' managerial career and he will be unhappy at the manner in which some of the goals were lost.

Celtic fell behind in Barcelona's first notable attack as Neymar collected at a short corner and played Messi past a static defence.

He finished well with a powerful shot and that set a tone for a night in which the Spanish champions were totally dominant and very rarely troubled.

Celtic could have levelled, however, when Scott Sinclair released Dembele and he was brought down in the area by keeper Marc-Andre Ter Stegen, with a penalty awarded.

Having scored three on Saturday, Dembele lacked the same composure and after a stuttering run up, his kick from 12 yards was at a good height for the German to redeem himself and save comfortably.

With that, any chance the Scots had of getting back into the game went as Messi added his second a couple of minutes later.

He linked up with Neymar to make the goal looked embarrassingly easy as a series of first-touch passes between the two ended with Messi walking the ball over the line.

Celtic did have the ball in the net before the break through Sinclair after a weak Kieran Tierney shot got caught under his feet but he had strayed offside and that was as close as the visitors came.

The second half was something of a procession, with a Neymar free kick making it three and leaving goalkeeper Dorus de Vries asking if he could have done more to keep a relatively central curler out.

Substitute Andres Iniesta then powered in a fourth before Messi got his third of the evening a mere 60 seconds later when he tapped in Suarez's cut back.

Speaking of Suarez, he had been fairly quiet to that point but quickly got in on the act himself, duly helped by Neymar whose fourth assist of the game meant it became 6-0.

Suarez's chest, turn and volley looked effortless but it wasn't Barcelona's final flourish. Instead that came two minutes from the end when he poked in from close range from Messi's pass.

It was a night of positive statistics for Barcelona. Messi's hat-trick was the 40th of his career and his sixth in this competition, a trio which brings him within seven of Cristiano Ronaldo's record of 93.

Celtic's attentions on the continent will turn next to their home game with City at the end of the month, where Rodgers will seek a notable upturn after a night to forget in Catalonia.