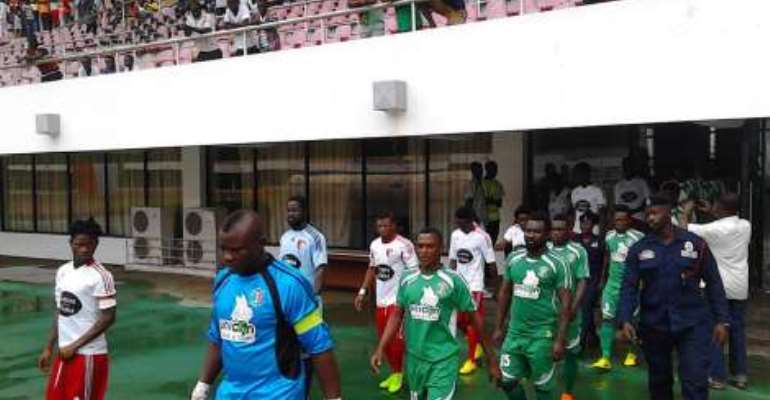 Sekondi Hasaacas battled their hearts and strength to victory against West African Football Association (WAFA) to give their relegation mission an impetus with two games to end the season by next Sunday.

The game was quiet dramatic with the setbacks and the eventual match winner before a literally perplexed home fans at the Sekondi stadium.

Hasaacas have a foot closer to the drop than to surviving following their 2-2 draw at Tarkwa to Medeama in the outstanding league match last Wednesday. The match was simply a matter of win or confirmation to lower division.

Surely too the first and major opportunity presented itself for Hasaacas to take the lead but it was fluffed significantly. Striker Richmond Kojo Poku was tripped by Mohammed Alhassan in the box and the referee awarded a penalty in the 24th minute.

Kojo Poku somehow to convert the spot kick as goalkeeper Theophilus Jackson dived to his right to parry the ball. A big blow and the ghost that haunted the team in Tarkwa seemed to here again when Samuel Afful also had his last minute penalty saved by Medeama's Daniel Agyei.

The fans were missing Eric Bekoe who was dropped from the team on the day. Hasaacas had come close several occasions to get a goal but all to failure beside the missed penalty. READ ALSO: Kwesi Appiah sacked as Black Stars coach

The Sogakope lads were in their usual competitive mood and they committed themselves to playing their good brand of football. The rain had come down continuously from early till match time so the pitch was slippery. It affected players' movements and the speed of the mitre balls.

The academy boys took the lead in the 31st minute through Togolese striker, Komlan Agbegnadan who scored a free header to Tanko Ibrahim's cross from the right flank. Tanko dummied Roland Amouzou before fetching his striker with the ball with an accurate cross.

The visitors enjoyed at the great displeasure of the home side. Tension soared higher than it was at the beginning. Chances were fading away minute by minute as the first half came to an end.

In the early exchanges of the second half, Ibrahim Sulemana missed target with a powerful shot from close range. However, Hasaacas equalized in the 53rd minute through an unusual name - Kingsley Adjei.

Adjei, the central defender jumped higher to finally finish off a direct free kick almost bound for goal from Albert Gaisie from 22 meters. Gaisie's curler from the angle was great that goalie Jackson and his defenders were beaten by the drive and Adjei took full advantage at the far post to nod the ball in.

WAFA should have gone up again in the 67th minute but incredibly Komlan missed the two chances at a glance. George Owu saved the first attempt and the striker put wide the rebound.

Three minutes after that chance and Hasaacas were celebrating a goal from the nimble foot of Saliw Babawo. The skimmer dribble an opponent before finishing a low ball through the legs of substitute goalkeeper Razak Abalora.

Hasaacas eventually succeeded at holding on to the lead for a win albeit to the frustration of WAFA lads who complained bitterly of bad officiating. When the final whistle was blown, the WAFA players went to clap for referee Nuhu Liman and his colleagues.

For team Hasaacas and their fans, it was all excitement and a shaky hope of relegation survival.