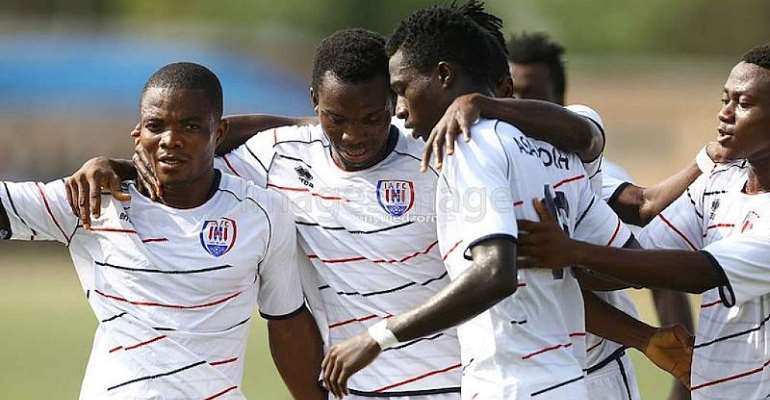 Inter Allies moved further away from the relegation zone after surprising themselves with a crucial 1-0 win over Dreams FC at the Theatre of Dreams in the Ghana Premier League on Sunday afternoon.

Attacker Frederick Boateng claimed the victory for the Eleven Is To One with wonderful headed finish from a Ropapa Mensah delightful cross on the hour mark.

Allies needed the points to ensure they remain in good position on the league log and they crucially claimed the win with a dominant display.

It was Allies who declared their intentions early from the start of the game as midfielder Prince Baffoe watched in disbelief as his goal-bound effort deflected a Dreams player for corner.

Emmanuel Nettey was booked for a crude challenge in midfield on the 6th minute mark. Allies should have taken the lead moments later when Gockel Ahortor bamboozled his way through two Dreams defender but fired just wide.

Coach C K Akunnor was forced to make alteration to his squad on 23 minutes when he withdrew the injured Emmanuel Hayford and introduced Prosper Donkor in his place.

Allies perpetuated their orchestrations upfront and Ropapa Mensah fired a hot-shot which Philemon McCarthy reacted with a world-class save on the 30th minute.

Dreams claimed the lion's share of possession after the half-hour mark and pestered the opposition goalmouth but Allies remained steady in defence.

Substitute Prosper Donkor advanced forward on a sublime solo run, outpacing a four markers in the process but he missed narrowly.

Dreams were awarded a penalty in the 58th minute and Abeiku Ainooson stepped up to shoot but his effort was saved by goalkeeper Kwame Baah.

Allies quickly turned play in their favour with Ropapa Mensah beating his marker on the right before sending in a swinger. Attacker Frederick Boateng outjumped his marker to connect home with a great header.

Allies tightened the backline by introducing Paul Abanga as replacement for Emmanuel Nettey on 64 minutes.

Dreams played desperately in search of the equaliser but Allies defended with great resolute.

Allies introduced youngster George Asamoah to have a feel of top-flight action as replacement for Ropapa Mensah but little could change before the game petered out.