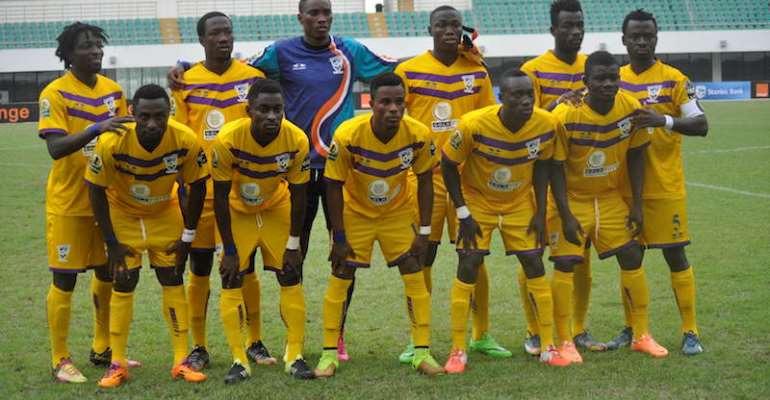 Medeama SC will face a stern test in view of achieving their target of a Top 4 finish when they tackle Asante Kotoko at the Tarkwa and Aboaso Park on Sunday .

The Yellow and Mauves moved to fifth place after drawing 2-2 with Sekondi Hasaacas in their outstanding league match last Wednesday at the same venue.

A win on Sunday could see them leapfrog both Hearts of Oak and Asante Kotoko to move to third place on the league.

They are only one point behind the two glamorous clubs.

Assistant coach Ben Owu will guide the team against the Fabulous on Sunday since head coach Prince Owusu resigned from his post last week.

Asante Kotoko are also looking to revamp their title hopes with a victory over the Yellow and Mauves this weekend.

They are positioned 3rd on the log with three points separating them and top spot.

The Porcupine Warriors will welcome back their stalwart centre back Ahmed Adams after recovering fully from an injury that has kept him out of action for close to a month.

He is set to join Tunisian giants Club Africain before the season ends. He is currently in the Maghrebian country.

They have drawn blank in all of their last three matches.

All of them have ended in a stalemate.
MATCH FACTS
Head to Head
Total matches played = 18
Medeama SC wins = 2
Drawn matches = 6
Asante Kotoko wins = 10
*Medeama SC have won just three of their last nine matches in the premier league.

They drawn all of their last three.
(W3 D5 L2)
*Medeama SC have recorded two losses in their thirteen home matches in the premiership this season.

(W10 D1 L2)
*Asante Kotoko have managed only one victory in their last seven away fixtures in the premier league.

(W1 D3 L3)
*Medeama SC have beaten Asante Kotoko only once at home at home in the premier league after eight attempts.

They have met eleven times in the process.
(W7 D4 L0)
*Medeama SC have kept seven clean sheets at home in the premiership this campaign.

*Asante Kotoko have managed to keep four clean sheets out of their thirteen away fixtures in the premier league.