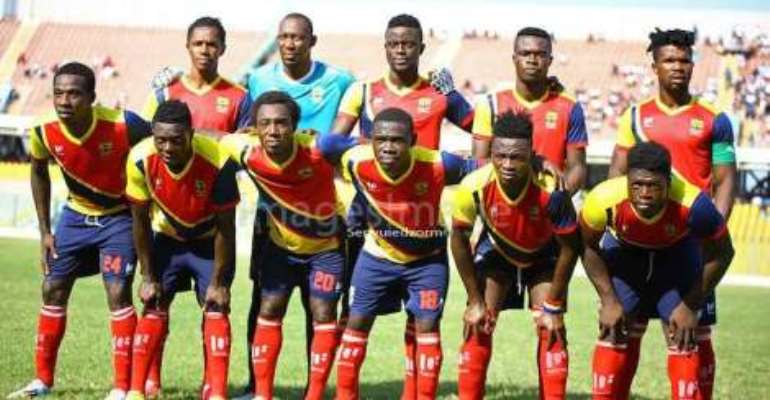 Hearts of Oak will be hosting Ebusua Dwarfs on Sunday at the Accra Sports Stadium on match day 28 of the 2016 Ghana Premier League.

The game will be the Phobians penultimate home game and they will be seeking to end their seven games winless streak while the Cape Coast giants have lost their last three games.

The Phobians held Dwarfs to a pulsating goalless draw game at the Cape Coast Sports Stadium in the first round. Hearts of Oak in their last league game lost 1-3 at Bechem while Dwarfs lost 2-0 at home to Medeama.

Yaw Preko will be in the dugout for the Phobians after the club's board relieved Sergio Traguil from his post after poor performance. READ MORE: Kevin-­ Prince Boateng  explains why he chose Las Palmas

Hearts of Oak are at the fourth position with 42 points and technically they are still in contention for the league title as the league leaders Wa All Stars have 48 points. For Dwarfs their battle to beat the drop will depend on Sunday's game - they are the 11 position with 34 points, four points better than the 15 placed team Hasaacas.

Hearts of Oak general captain Thomas Abbey in an interview with  Pulse.com.gh  ahead of the duel said:

'We have made our supporters worried due to our recent poor performance, looking at the league standings we are completely not out in terms of winning the league so we are taking Dwarfs' match very serious.'

'We are going all out on Sunday, we have to make our supporters happy so we have to win on Sunday. Dwarfs are also fighting to escape relegation so it will be a tough game but we must win.'

But Dwarfs' defender Christopher Bonny says their target on Sunday is the three points.

'Hearts of Oak are wounded lions because they will be playing at home but we also want the points badly because we are not safe on the log sheet.

'This game will determine our fate in the league, so we are approaching this game with a winning mentality.' HEAD TO HEAD

Hearts of Oak have engaged Ebusua Dwarfs 15 times since 1999. Hearts have won 5 times as against Dwarfs 7 with 3 games ending in a draw.

In their 15 meetings, 29 goals have been scored, the Cape Coast based club leading the pack with 16 goals against Hearts' 13. SEASON RESULT