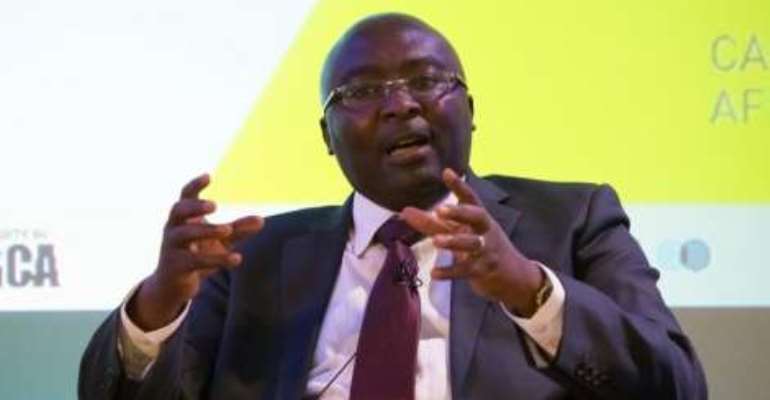 On 8 September, 2016, Dr. Bawumia, the NPP's running mate in the upcoming 2016 presidential elections delivered a seminal speech in Accra.

The speech followed a pattern Dr. Bawumia has become notable for: a masterful blend of solid policy and hardcore politics that is often difficult to untangle by objective Ghanaians seeking to rely on the technocratic experience of the former senior Bank of Ghana official to make sense of Ghana's economic situation in an unbiased, non-partisan, manner.

As some of our readers know by now, IMANI is, in keeping with past tradition, strongly focused exactly on this issue: filtering out partisan and self-serving opinions and claims from solid facts in the promises and policy proposals being made by politicians in the lead up to the 2016 elections.

In this short brief, we shall be attempting to assist Ghanaians sift through some of the many claims made by Dr. Bawumia to see where the facts completely agree with him and where his interpretations of data are so partisan as to warrant caution on the part of observers.

We have in recent times experienced a strange upsurge in accusations that we are much too hard on the NPP, and that by subjecting NPP's policy proposals and promises to rigorous scrutiny we are letting the NDC off lightly. This accusation is of course patently false and ridiculous. No organisation in Ghana can claim to have subjected the NDC's programs to examination more than IMANI. Whether it was the Ghana Gas Plant, the CDB loan, the Sekondi Industrial Estate, or the Komenda Sugar Factory, IMANI has always been at the forefront of the critical quest of demanding accountability from the government of the ruling party. IMANI has been fearless in holding all parties in Ghana to account since our founding in 2004.

The other issue that sometimes come up is whether we discourage policy proposals by painstakingly examining clear promises whilst ignoring hazy ideas or failing to criticise parties that produce no proposals at all. Of course, as a 'think tank' focused on policy, evaluation of policy proposals is our natural terrain. The more objective and concrete a policy proposal the more effective we are in our critique. However, the truth is that for those voters for whom policies matter, a concrete policy heavily critiqued is certainly better than hazy ideas or no ideas at all.

It is absurd to think that such voters will penalise parties that dare put out concrete policies and strive to make our politics one of a competition over facts and policies while rewarding parties with zero concrete policies or merely hazy ideas.

Clearly, therefore, our work can never serve to damage those parties that contribute to making Ghana a place where superior political programs triumph over empty emotion and cheap slogans.

This short brief is in three parts. Firstly we shall catalog some of the key criticisms made by Dr. Bawumia of the current government and its programs where in our view the facts and data used were unfairly manipulated to serve a partisan agenda (let's call these criticisms 'category A').

Secondly, we shall catalog other key criticisms where the facts available offer no other conclusions other than those reached by Dr. Bawumia (let's call these 'category B').

Then lastly we will look at Dr. Bawumia's key prescriptions (made on behalf of the NPP). Some of our checks of these promises draw on whether the data underpinning the proposals come largely from category A or category B. Using this distinction, we will share our opinions of the positive potential and/or risks and pitfalls of these prescriptions. Unfair Interpretations of Data for Partisan Advantage

Claim: The NDC has over the 8 years it has ruled Ghana since 2009 amassed and spent 12 times the nominal resources that the NPP had over its 8 years of rule.

Comment: By using the 'nominal' measure of the resources, Dr. Bawumia cleverly exaggerates the actual difference between the amounts obtained by the NDC compared to the NPP. If we factor in inflation (in both dollar and cedi terms), exchange rate depreciation and other 'time value of money considerations' such as interest differentials, the difference between the GHS 20 billion Dr. Bawumia claims the NPP secured and the GHS 248 billion he allocates to the NDC has to be adjusted. The complexity of the calculation stem from the fact that one has to compound the computation cumulatively from 2000 to 2016 Q3 in order to obtain the real multiple, which is about 3 times in 2007 historical US dollar terms. This is still very significant (and the point that commodity prices have been more favourable to the NDC than to the NPP is also largely fair), but obviously the multiples are not exactly what Dr. Bawumia insist they are.

Comment: In 2001, when the NPP took office, the minimum wage was 5500 old Ghana Cedis (dollar equivalent of $0.8). By end 2008 when their term came to an end, it was GHS 2.25 ($1.9). Using the US Feds Funds Rate and historical inflation rates to reset the value to 2001 constant rates indicate a real value of about $1.5. So Dr. Bawumia is not dead-on accurate, but his general point is valid. The NPP did roughly double minimum wages between 2001 and end-2008 in constant US dollar terms. The NDC, on the other hand, started with a rate of $2.1 in 2009 and is ending its term with a minimum daily wage of $1.9 (lower dollar inflation and treasury rates account for the lower discount factor). In effect, wages for the lowest earners in the economy have been stagnant under the NDC. So why are we still saying that Dr. Bawumia's point is nevertheless unfair. Because growth in minimum wages does not automatically remove inequality. If the wage growth among upper-tier earners increase more dramatically, which is likely to be the case given the GDP shifts witnessed over the period, then inequality could actually have increased. The truth is that GINI index information on Ghana is generally of such poor quality that one cannot make conclusive points on this matter one way or the other.

Comment: As we will show below, Dr. Bawumia chooses whether to use constant USD dollars or historical dollar rates depending on which point he is canvassing. This can be somewhat arbitrary. Clearly, if he uses current USD as he does with great skill in computing the current debt to GDP ratio, then he has to peg the debt borrowed by the NDC according to the current dollar value (in line with the debt servicing burden) and if he did that he will have to benchmark 2012 USD values with current USD values. In this respect, it is simply not possible for the NDC to have borrowed $39 billion if the total debt stock is $26 billion (which is how we get the 71% debt to GDP ratio Dr. Bawumia mentions, and which we comment favourably on below). Also if the debt stock at end-2012 was $18 billion, then President Mahama can only be said to be responsible for 31% of Ghana's total debt stock. This figure is indeed high, since the base is debt owed from Independence. But the full shock is somewhat tempered by the fact that we have also experienced debt forgiveness as a country in the past. To obtain a composite figure of debt since independence, defaults and forgiveness would have to be factored into the mix, which will further reduce the total percentage. For example $4.6 billion debt forgiveness was recorded in 2006 alone. Adding that amount alone back into the stock would increase the total base by nearly 20% and reduce the total amount of money borrowed under President Mahama as a percentage of accumulated stock since independence to about 23%, which, high as it is, is not nearly as dramatic as 66%.

Claim: The NPP brought down the treasury bill rate (we assume he is referring to the average 91-day rate) from 42% in early 2001 to 24% by the time it left office in 2009. This is far better than the NDC's performance.

Comment: This whole line of analysis is a bit contentious. In January 2009, when the NDC assumed office, the treasury bill rate reached a monthly high of about 28%. This is roughly comparable to the rate at the end of 2001. In between 2001 and 2015, the rate has fluctuated quite erratically. Dr. Bawumia would have to compute complex mean rate variables for the two periods he is comparing rather than try to use two arbitrary points in time to make his point.

Claim: Average lending rate is now about 40%, which is worse than the situation under the NDC.

Comment: This is another claim that is rather hard to ground without complex mean rate analysis over aggregate periods. The CEPA graph below depicting average lending rates between the beginning of 2006 and the end of 2014 shows that on average the rate dynamics have been tepid and hard to compare secularly. 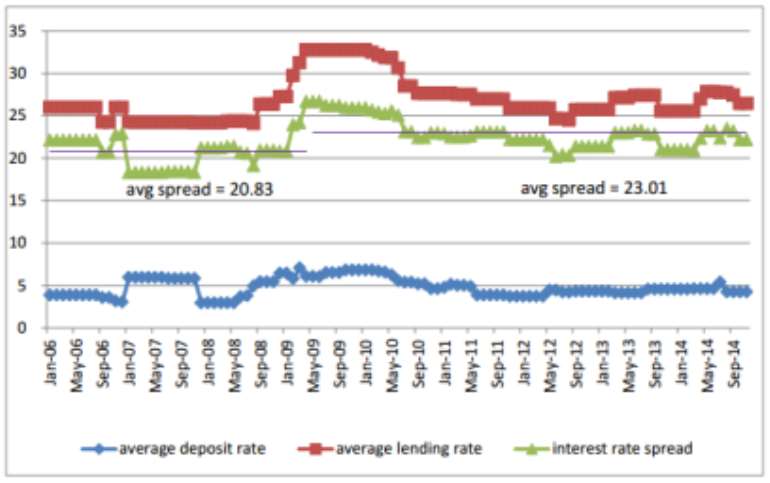