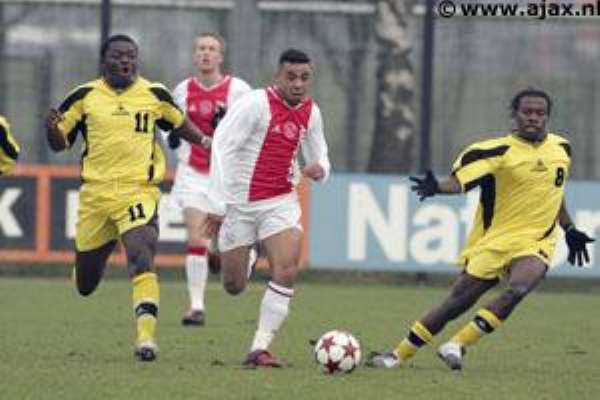 Ghana's national team lost 2-1 to the Dutch giants Ajax in a friendly match in Amsterdam on Wednesday. Most of the Ajax-1 players are currently 'on tour' with their national teams, so that the Ajax team that took on the Black stars in a friendly at De Toekomst today looked a lot like Young Ajax. Ghana fielded a strong team despite the absence of Samuel Kuffuor of Bayern Munich and Michael Essien of French champions Olympique Lyon. The match was just a friendly kickabout on a rainy Wednesday afternoon, but there was a tremendous atmosphere at De Toekomst. Approximately a thousand of colourfully dressed Ghanaians from the nearby Amsterdam suburb of Bijlmermeer showed up, singing, dancing and banging their drums. They were thoroughly entertained by their national team, especially when Juventus' Stephen Appiah - man of he match -showed what he can do with a ball. The Ghana roster included Abubakari Yakubu (loaned out by Ajax to Vitesse) and Anthony Obodai. The latter was banned from the Ajax-1 squad for repeatedly showing up late for training. The hosts opened the scoring in the first half through the Swedish midfielder Rasmus Lindgren. Israel-based John Painstil got the equaliser for Ghana in the 76th minute. But Lindgren quickly restored Ajax's lead two minutes later. Despite the defeat Ghana's captian Stephen Appiah, who plays for Italian side Juventus, was happy with his side's performance. "We played very well even though we lost," Appiah told BBC Sport after the match. "It was good preparation for our next World Cup qualifier against the DR Congo in March." "I thought it was fun to play against Ajax for a change," Anthony Obodai said after the game, "but I do think we should have won." It was the first game in charge for coach Ratomir Dujkovic, who took over the Black Stars two months ago. The Serbian coach recalled Matthew Amoah of Vitesse Arnhem for his first cap since the 2002 Africa Cup of Nations finals in Mali. Defender Hans Adu Sarpei of the German Bundesliga side Wolfsburg also made his first appearance for three years. GOALS 40' 1-0 Rasmus Lindgren 76' 1-1 John Painstil 78' 2-1 Rasmus Lindgren Referee: Steegstra Yellow cards: Kok (Ajax), Pappoe, Yakubu (Ghana) Attendance: 1,300 Ajax line-up: Stekelenburg; O'Brien, Kras Escudé (46. Sahadewsing), Maxwell (46. Martina); Rusculleda (08. Kok), Aborah, Lindgren; Tiberkanine, Anastasiou, Rosales (46. Sangoy). Ghana line-up: Owu; Pappoe, Amponsah, Mensah (46. Boateng), Adu Sarpei (46. Osei); Obodai (46. Yakubu), Amoah (46. Painstil), Appiah, Gyan; Muntari, Attram.