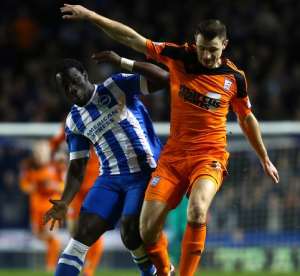 Brighton and Hove Albion manager Chris Hughton feels Ghanaian attacker Elvis Manu was a flop with the Seagulls and has hinted the talented player could head for the exit door.

Manu, 22, moved to The American Express Community Stadium last summer from Feyenoord where he was a cult hero.

But he could only make five (5) substitute appearances in the entire season, blocking his chances of getting an eye from Ghana coach Avram Grant.

Brighton acquired Manchester United youngster James Wilson to add to experience names like Bobby Zamora and Israeli forward Tomer Hemed and the Ghanaian could not manage the competition.

Hughton believes Manu could not live up to the hype around him while in the Dutch league and hints he could be offloaded.

"He [Elvis Manu] came in and can play up front or in a wide area but it was a very difficult season for him. We want people we feel can improve us and give us good options up front," he told The Argus.

Manu has already been linked with a return to the Netherlands where newly-promoted Excelsior Rotterdam have expressed interest in his services.

He is tied to Brighton until the summer of 2018 and he is valued around â‚¬1.8 million.

Give Me Chance To Correct My Errors — Disqualified Kofi Kora...
31 minutes ago

Gov’t Will Establish Committee On Compulsory Acquisition Of ...
51 minutes ago