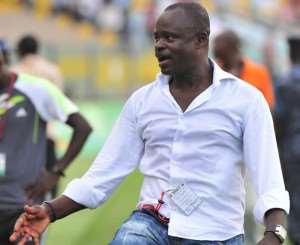 
Medeama coach Prince Owusu insists his team are not afraid of five-time African champions TP Mazembe ahead of the meeting of the two side's in a CAF Confederation Cup tie on Sunday.

The Ghanaians are in Lubumbashi for the opening group A fixture at the Stade TP Mazembe this weekend.

The odds appear stark against the two-time Ghanaian FA Cup holders, who must pull off a massive performance in the Democratic Republic of Congo to feared.

Bookmakers have tipped Mazembe to have a go at the ambitious Ghanaian side, despite their impressive performance in the competition so far.

But Medeama trainer Prince Owusu is adamant about his side's chances amid the growing reputation of his young squad.

"We are happy to be here. Its a great chance for my boys to test their muscle against one of Africa's biggest teams and we are looking forward to the fixture," he said

"Its a massive game for both teams and we'll see how it goes.

"Obviously Mazembe starts as favourite but we shall give them a good game.

"We are not daunted by the pedigree of our opponent. We are a very patient club and will see how it goes on Sunday.

He added: We need to put up a great performance to make a huge statement on the continent."

Medeama are without key defender Daniel Amoah ahead of the crunch tie against the Ravens.