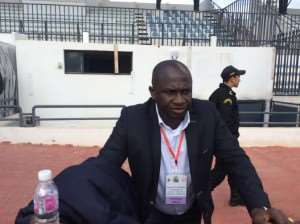 The ever-smiling and affable football owner is fuming with rage over the malicious reportage which was engineered by a section of the local media.

Some Ghanaian media outlets had claimed the business magnate had sold his plus house at Takoradi to fund the side's trip to the Central African nation due to the club's current financial situation.

But he has rubbished the reports, insisting they were fabricated to create a negative impression about the club.

"It's totally ridiculous, absurd and reckless for anyone to make that claim without cross-checking the fact," he fumed

"There are financial difficulties everywhere, but to sit at the comfort of your home and manufacture such a lie is unfortunate.

"I have not sold my house neither do I intend to do so.

"We have Goldfields Ghana Limited which has provided tremendous financial support to the club.

"They have been with us all the way and will continue to offer a hand of support to us.

He added: I'm struggling to understand the motive behind this reportage.

"But that's the problem with some of our journalists in Ghana. They are only interested in manufacturing stories to occupy space. It's just unfortunate.

The club has not denied reports of being overstretched financially but have never stated it's in a state of comatose.

The two-time Ghanaian FA Cup holders will play as guest of the five-time African champions in their opening group A clash in Lubumbashi on Sunday.