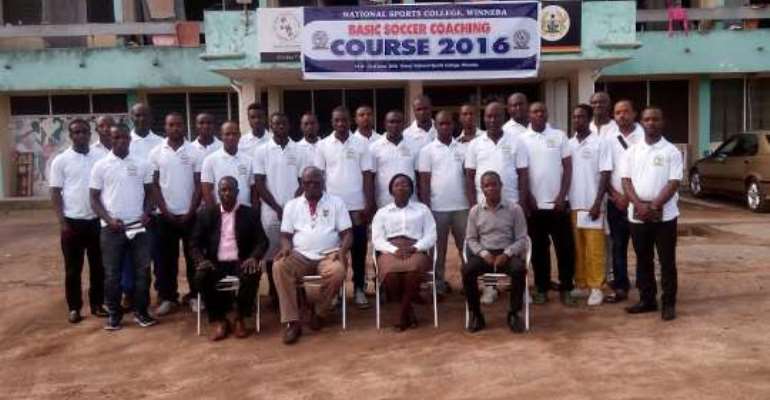 By Edna A. Quansah, GNA
Accra, June 14, GNA - The Ministry of Local Government and Rural Development (MLGRD) in partnership with the Ministry of Youth and Sports (MoYS), will soon commence the development of sports coaches at the various districts.

The initiative, would be in partnership with the National Sports College (NSC), Winneba, which would run series of courses for the various stakeholders in sports.

The move, which has already began, saw the induction of about 45 coaches from the selected Municipal, Metropolitan and District Assemblies (MMDAs) to a 10-day 'Basic Soccer Coaching Course' at the NSC on Monday.

The Director of the College, Mr Erasmus Adorkor said, the college is mandated to run courses for persons in the sports fraternity and that mandate was put on hold due to inadequate funds.

He said the Sports Ministry decided to revive that mandate by collaborating with the Local Government Ministry to utilize the sports components of the District Assembly Common Fund (DACF).

Mr Adorkor, explained that in the coming months, all MMDCEs have been tasked to nominate and sponsor two coaches for the course saying 'the second batch would also start after you are done here.'

Some of the participants at the event expressed their delight to be part of the course saying 'we are grateful to the assembly for nominating us to get formal education in coaching.'

Others were also excited on the crop of resource persons appointed to run the course for them.

'Oti Akenteng and Didi Dramani have been my mentor since I decided to enter into coaching. I have always enjoyed their style of play and tactical abilities and I will be looking forward to learn a lot from them,' a participant said.

The course is expected day program is expected to end on Tuesday, June 21, at the National Sports College, Winneba.