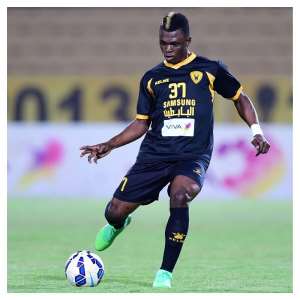 An unnamed French Ligue 1 side has joined the race for the signature of Ghana defender Rashid Sumaila, the player's agent has confirmed.

In an exclusive chat with GHANAsoccernet.com, the Portuguese agent of the Al Qadsia defender Pedro Pinto revealed that a French Ligue 1 club has declared their intention of securing the signature of the industrious center-back.

"Yes we have many offers for the player now. Yes a club in France has also joined the race for the player. But wait, I'll tell you everything later," Pedro Pinto wrote.

This latest revelation means that the Ligue 1 club will have to battle it out with other clubs as the agent confirmed two clubs from the Belgium Jupiler League have formally requested for the player.

The former Asante Kotoko defender had a wonderful season in Kuwait winning the league with Al Qadsia as well as emerging the best foreign player in the country.

The hard working defender scored three goals in 25 league appearances and won the club's best defender of the season.