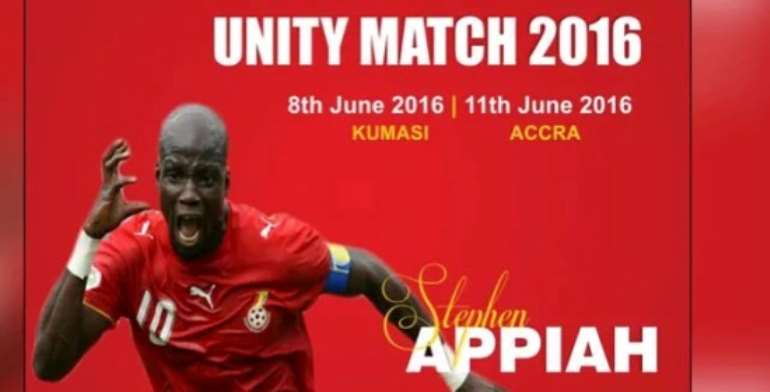 The game, being organised by former Black Stars captain, Stephen Appiah, is geared toward promoting peace in the country ahead of the general elections later this year.

Stephen Appiah, himself an excellent football icon, and someone who idolizes peace, will be at the Baba Yara Sports Stadium with a hosts of exceptional football personalities to engage the Porcupine Warriors in what promises to be an exciting evening of football.

Among the stars expected to grace the occasion are former Dutch international, Edgar Davies, England's Sol Campbell and Middleborough's George Boateng. Already, Kotoko players have been talking about the game. They are promising to give the World XI a stern opposition.

'We watched some of them and really admired them' said Amos Frimpong, captain of Kotoko as he spoke on the match in an interview at press time.

"Edgar Davies, for instance is one of the finest midfielders I have ever watched. Sol Campbell was also a great defender. I learnt so much from them. I would be glad to play with them on Wednesday evening."

Asked whether the Porcupines wouldn't be overawed by the stature of some of these big and impressive football figures that will be at the game or in fact, in the match, Amos Frimpong responded that, they would give their opponent fair taste of the revival that characterized Kotoko's performance getting to the end of the league's first round.

'We won't be intimidated by their presence. We would face the squarely like we see them every day; after that, we will make friends' said the team captain.

The Porcupines will return from their one week break yesterday to begin preparations for the second half of the season.