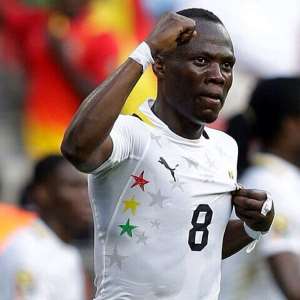 Black Stars and Udinese midfielder Emmanuel Agyemang Badu has reiterated the hunger of Black Stars players for an Afcon trophy few days after picking a ticket for the 2017 edition to be hosted in Gabon.

The 4-times Africa champions have unsuccessfully been chasing their fifth trophy for 34 years.

But the 2009 U20 World Cup winner says the entire playing body is hungry for the trophy just as Ghanaians are.

"We are really hungry for the AFCON trophy. We know Ghanaians really need it and we equally need it," Badu said in an interview on Asempa FM.

"Just after our game with Mauritius, we [the player] knew the attention is now turned on the trophy.

"We know it's not going to be easy but we are equally hungry for it. We need the prayers of all Ghanaians to clinch the ultimate," he added.

Ghana qualified for the seventh consecutive AFCON on Saturday following a 2-0 win over Mauritius, making it the 21st time Ghana is showing up at the continents biggest football festival.