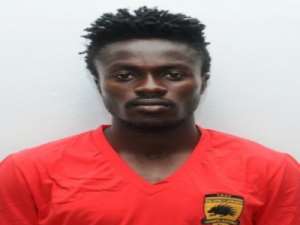 Kotoko failed to sign striker Nathaniel Asamoah due to the player's lack of commitment to the club, deputy operations chief Ali Maradona has revealed.

Asamoah pulled a massive trick on the Porcupine Warriors to complete a two-year deal with Aduana Stars on the transfer deadline day.

The former Medeama attacker had long been linked with a return to his former club.

He spent over five hours at the club's secretariat on Monday but ended up signing for the Fire Club for a reported GHC80,000 fee.

Kotoko officials have come under line of fire for their failure to land the former Raja Casablanca attacker, but the clubs deputy operations manager Ai Maradona has explained the circumstances.

'Nathaniel Asamoah arrived  at Kotoko secretariat  around  10am in the morning  and left there  at 2:14pm on transfer deadline day.We concluded talks and arrive on a decision. He was demanding GHC2000 as monthly salary, Chairman Pee and Alhaji Abu Lamini were ready to pay the money but we relised the player was not committed to play for the club,' he told Kumasi- based FOX FM

'Whiles negotiations were ongoing at the secretariat Nathaniel Asamoah was busy with his phone whattsaping with the officials of Aduana Stars in our premises. I pledge with all the supporters to forget about the player and rally behind the current players at Kotoko when the second round of the Ghana Premier league resumes."