Andre Ayew bemoans lack of interest in Black Stars games, pleads for the love to return 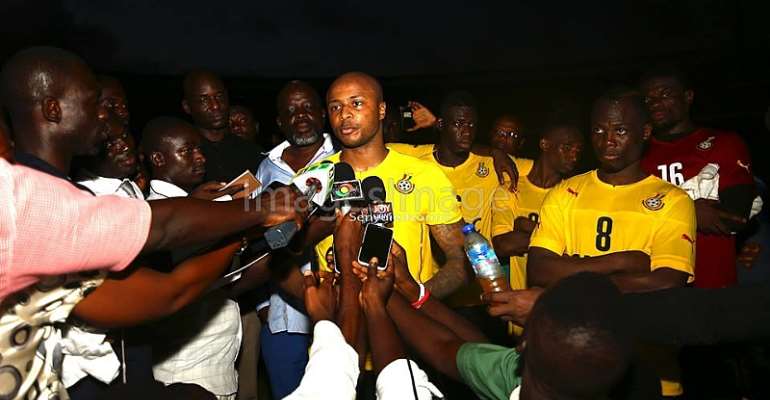 Ghana deputy skipper Andre Ayew says he has been losing sleep over the recent lack of interest in the national team especially when they are playing at home.

Ayew will lead the team in the absence of Asamoah Gyan as the Stars aim to secure qualification to the Africa Cup of Nations to be staged in Gabon next year.

The Black Stars in the past recorded huge numbers everywhere they played but there has been a sharp contrast since Ghana's chaotic world cup campaign that was highlighted with government flying money to pay disgruntled players.

26-year-old Andre Ayew who is just coming off a stellar season with Swansea City in England where he scored 12 goals says he was sad when the Hearts-Kotoko game recorded numbers mightier than the Ghana-Mozambique game played in Accra.

"This past one and a half year its been difficult between the Black Stars and fans and we have to be honest," Ayew told the media

"For me as a leader and with other leaders and my colleagues its very painful."

"When we played against Mozambique the stadium wasn't full but when Hearts of Oak played Kotoko i was in France but i saw the stadium was full its painful."

"I have to be honest Ghanaians want us to win and we have been wining but we still don't feel the support."

"There are different issues that are true or falls but i am just pleading that we all put things behind us and move on and that they should support us in prayers."

Ayew will be hoping that an emphatic victory against Mauritius on Sunday will go a long way in healing the wounds.