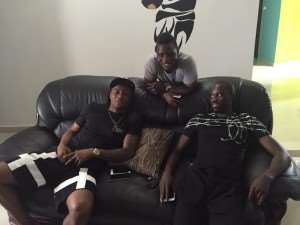 The Swansea City star, again displayed his immense humanity and leadership by visiting the injured midfielder at his East Legon residence to offer his support.

Ayew, who is currently on holiday in his native country after a hugely successful debut season in England, is using his time to offer support to his former Under-20 international teammate.

The iconic Ghanaian figure was in the company of compatriot Mubarak Wakaso.

Mohammed, who plays for Russian side Kuban Krasnodar has returned to his native country Ghana for holidays as he continues his rehabilitation from an injury that could potentially keep him out for six months.

The Ghana international went under the knife in Germany to correct the cruciate ligament rupture.

He suffered the injury after 63 minutes when they hosted Rostov in a Russian Premier League match last month.

The midfielder has since returned home having been given the green light by the his club's doctors to return home while they continue monitoring the healing process of the knee.

The 26-year-old has been ruled out of Ghana's remaining two matches in the 2017 Africa Cup of Nations qualifiers against Mauritius away in June and the home clash against Rwanda in September.