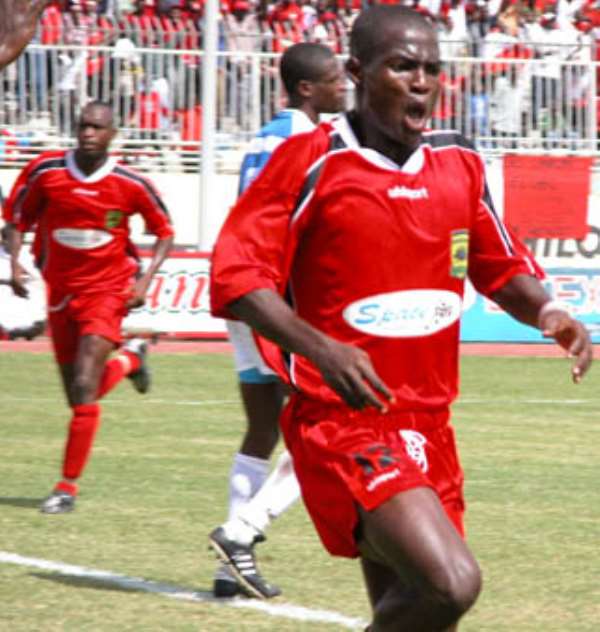 Accra, Jan 2, GNA - A last minute equaliser deep inside injury time by Louis Agyeman gave Accra Hearts of Oak a lifeline of a one all drawn game to go into the second leg of the Confederations Cup finals in Kumasi. The goal, which came when most Hearts supporters had already given up hope and were on their way out of the Accra Ohene Djan sports stadium on Sunday brought the home team on level pegging to cancel a Michael Osei's 60th minute lead for Kumasi Asante Kotoko. Contrary to the expectations of the thousands of Hearts fans who thronged the Ohene Djan Sports Stadium of expecting a big win for their team to make the second leg in Kumasi an academic exercise, it was rather Kotoko who took the early initiative from the blast of the whistle and dominated the early stages. Such was Kotoko's early dominance that by the fourth minute they had forced Hearts to concede two corner kicks, which they failed to convert. Kotoko's first chance came in the 10th minute when Nana Arhin Duah made space for himself in the box to fire but for a timely save by Mohammed Saani in post for Hearts. Hearts' reply was immediate when a quick break from midfield found Prince Tagoe unmarked, but the striker could not keep his composure and fired straight into the waiting hands of George Owu in post for Kotoko. Hearts gradually settled into their rhythm and took control of the midfield and came close on several occasions but their striking force of Prince Tagoe and Bernard Don Bortey failed to make use of any of the chances. The first yellow card of the match, was shown in the 37th minute to Issah Ahmed by Moroccan referee Mohammed Guezzaz when he brought down Prince Tagoe in front of the Kotoko penalty area. Bernard Don Bortey curled in a free kick to the corner of the post which Keeper Owu again responded well to the task to push the ball to touch. In the second half, Hearts took the game to Kotoko and in the 50th minute and came close to scoring when Lawrence Adjei was put through but found his diagonal shot whisk just past the goal posts. The threat brought life immediately into the game of Kotoko who nearly took the lead in the 54th minute but for a daring save by keeper Saani who blocked Charles Taylor's shot from entering the net. Kotoko deservedly took the lead in the 60th minute through Michael Osei, who scored from a rebound after Saani had failed to make a first time save of a free kick from Charles Taylor just outside the "18". Kotoko after taking the lead surprisingly settled down and dominated the game from the midfield where Steven Oduro, Yusif Chipsah and Michael Asante played a great game to reduce Hearts with occasional breaks which were all wasted. With their tails up, Kotoko's Coach, Hans Dieter Schmidt brought on Edmund Owusu Ansah, Imbola Sanji and Kwaku Essien for Yusif Chipsah, Michael Osei and Nana Arhin Duah to consolidate their lead. But the changes did not work out as planned as Kotoko relaxed and started playing to the gallery in the final stages of the game which they paid dearly for at the end. Hearts punished Kotoko for their lack of concentration deep inside injury time when Louis Agyman who had been a thorn in the flesh of Kotoko defence all day, from nowhere pounced on a loose ball just in front of the Kotoko goal area to place the ball beyond the reach of Owu for the equaliser which turned out to be the last action before the referee brought the proceedings to an end. Line up: Hearts - Sannie Mohammed, Amankwah Mireku, Acquah Harrison, Daniel Coleman, Dan Quaye, Adjah Tetteh, Eric Nyarko, Louis Agyemang, Lawrence Adjei, Prince Tagoe/Ablade Morgan and Bernard Don Bortey/Emmanuel Osei Kuffour. Kotoko - George Owu, Michael Ofosu Appiah, Godfred Yeboah, Joseph Hendricks, Issah Ahmed, Yusif Chibsah/Edmund Owusu Ansah, Stephen Oduro, Michael Asante, Nana Arhin Duah/ Mbola Sanji, Michael Osei/Kwaku Essien and Charles Taylor.