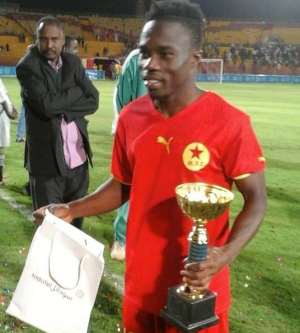 The agent of Augustine Okrah has revealed he will officially ask the Ghana Football Association to submit the superb rabona scored by the player recently for a possible nomination for the FIFA PuskÃ¡s Award.

It grabbed the headlines and has been viewed 41,000 times on YouTube within a month.

Arthur argues: ''The goal is aesthetically a beauty and certainly a goal of the season contender anywhere in the world.''

The PuskÃ¡s Award is for the goal, scored anywhere in the world, adjudged to be the years's best in terms of aesthetic significance and beauty.

If Okrah's goal is nominated, he will be at the next Ballon d'Or to see if he is the winner.

If the request is made, the FA will have to review the criteria of the FIFA PuskÃ¡s Award and decide if it is worth writing to FIFA to nominate the goal for possible consideration as a contender for 2016.

Arthur is the sole agent of ArthurLegacy Sports, an agency managing 18 players in Europe and beyond.