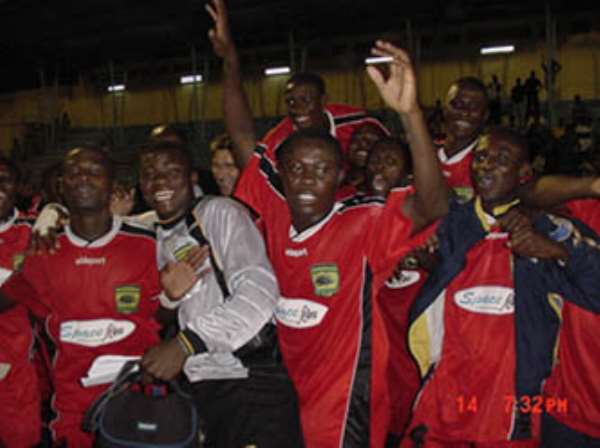 Accra, Dec. 29, GNA - Call it a battle fit for the gods, the clash of the titans or a continental show piece and you will not be wrong in any way as the two most glamorous clubs in the country - Accra Hearts of Oak and Kumasi Asante Kotoko clash in the first leg of the final match of the Confederations Cup Competition at the Accra Sports Stadium.

Hearts, days before the match have made their intentions of clinching the ultimate and finishing off the clash in Accra by recording a wide margin to make the second leg in Kumasi an academic exercise, whilst Kotoko are banking their hopes of presenting their fans in Kumasi with a Christmas gift by picking a favourable result in Accra and rounding it up with total victory in Kumasi in two weeks time.

Though the abrupt cancellation of the match affected the initial preparations of the two sides, they seem to have over come it by stepping up their preparedness for the game.

Hearts have for the past weeks been hiding in Togo where they undertaken some friendly matches, whilst Kotoko have hovered around Gomoa Feteh and Kumasi in preparations for the game.

Whether the wishes of these two sides and their level of preparations can be translated into victory remains unanswered till Sunday's encounter when they pitch strengths against each other at the nations' Wembley.

For many Ghanaians, the clash of the two sides in the finals was a dream come true, since the desire was harboured right from the onset of the league stages of the competition, when the two sides were grouped in opposite zones and Sunday's clash will therefore see the first phase of the materialisation of this long cherished dream.

Rivalry will be re-kindled, pride, honour and money would be at stake as the two teams clash taking into consideration the historical background surrounding matches between the two clubs, both on the local as well as the continental scene.

For Kotoko, it is now or never after failing to win the Cup Winners Cup in 2002 at the Kumasi Sports Stadium whilst Hearts will seek to add to their silver wares another continental trophy after annexing the CAF Champions League and the Super Cup in 2000 and 2001.

Coach Hans Dieter Schimdt of Kotoko has already described the game as the finest moment in his career and he is looking forward to map out the best tactical and technical strategy to implement his dreams of annexing the cup, whilst the likes of Joe Hendricks, Nana Arhin Duah, Godfred Yeboah, Shilla Alhassan and George Owu among others who witnessed the ordeal of the trophy slipping through their fingers in 2002 will have the second opportunity to make amends.

Key player, Charles Taylor will also like to go into history as helping Hearts and Kotoko to win continental trophies whilst the Ofosu Appiah's, Tiero's, Owusu Ansahs', Issah Ahmed and the Michael Asante's are on a history making mission for the first time in their careers, just as Chief Executive Major Yaw Larson who will like to win another laurel for the club, this time as the real man in charge after assisting Yaw Bawuah to win the cup in 1982 for Kotoko.

On the other hand, Hearts seem to have seen it all before, following the presence of Amankwah Mireku, Dan Quaye, Adjah Tetteh, Emmanuel Osei Kuffour, Eben Dida and Joe Ansah who were active members of the 2000/2001 victorious squad that mesmerised the entire continent under the same technical director, Sir Jones Attuquayefio.

Coach Attuquayefio and his "old guards" seem to have also been motivated by the prize money of 300,000 dollars and are bent on repeating the 2000 success story but will be relying on the massive support from "craving for success players" like Eric Nyarko, Louis Agyeman, Prince Tagoe, Acquah Harrison, Dan Coleman, Francis Bossman and Bernard Don Bortey.

"Trust me for that, I have what it takes to beat Kotoko to win this trophy" these are the words of coach Attuquayefio when he spoke to GNA Sports about the match and the man seems to have gone through the mill before even at the Nation's Cup level where he handled the national team of Benin and one could say he possesses the temperament and the technical know-how needed at this crucial moment to clinch honour for the Phobians.

The above-mentioned factors give indications of two sides who are very hungry for success and leaving no stone unturned to get to their destination.

Though there have been this popular assertion that matches between the two sides follows no form guide and anything can happen after the 90 minutes, one is tempted to believe that this particular match will adopt a form guide, judging from the nature of coaches at the helm of affairs of the two sides, but a lot too would depend on the calibre of players to be fielded for the game.

As the match requires players of the highest character to stand the cheers and the boos from the packed to capacity crowd, Kotoko seem to be ahead in this department where almost all their players have been tried and tested under similar circumstances but whether the likes of Prince Tagoe, Mohammed Saanie and Acquah Harrison on the part of Hearts can muster the needed courage to stand the test of time will be settled on Sunday.

However, the ability of the defensive set up of the two sides to contain the sharp edges of their opposing attacking machineries will be the decisive factor as both sides have proven to be very potent in front of the goal post.

All in all, both sides have scored ten goals each in the league stages. Kotoko conceded seven goals out of the ten with Hearts picking five balls from their net.

Kotoko scored eight of the goals at home whilst Hearts netted nine at home.

This gives an indication of equal attacking strength of both sides with a bit of defensive lapses, but matches between the two sides have a lot at stake and any defensive error on the part of the any of the sides will spell their doom.

The technical teams of both sides having put their players in camp for more than one week now in preparations for the game, suggests that each side will be coming onto the pitch with the best formula in all departments of the game to execute their respective tasks. Based on these, a tight match is anticipated on Sunday and will be repeated in the second leg game and there is the possibility of the winner coming out with a slim margin.

At the two match duel, the best side will not only be engulfed in joy, but take home the pride, honour and the colossal 300,000 dollars as well as go into the history books of the Confederations of Africa Football (CAF) as the first club to have won the novelty trophy.